Welcome back to Congress, Champions for Children! 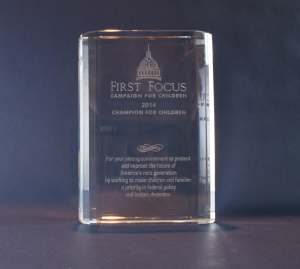 The new Congress is a new opportunity for children’s advocates, mothers, fathers, aunts, uncles, future parents, pediatricians to share how important it is that children are the priority in federal policy and budget decisions. A recent poll of House and Senate offices by the Congressional Management Foundation found that most consider less than 30 social media comments enough to gain attention on an issue. And over half said that just a single constituent is enough to be influential.

Please take a minute to welcome back on Twitter the 2014 Champions for Children, thank them for making it their priority to invest in kids, and share with them the issues important to you in the New Year. You can use the suggested tweet below, or find your Congressional representatives' Twitter account by state. You can also see and thank returning Defenders of Children, the next highest honor, here.