Washington – Last week both chambers of Congress passed a bipartisan package to extend the payroll tax cut and unemployment insurance through the end of the year, an important win for families and communities across the country. The legislation did not include proposed restrictions to the Child Tax Credit (CTC) that would have cost low-income immigrant families an average of $1,800 annually, impacting up to 5.5 million children. In response to the bill’s passage without this harmful provision, First Focus Campaign for Children President Bruce Lesley issued the following statement:

“Every year, the Child Tax Credit protects millions of kids from falling into poverty, so protecting it is an important victory for children and families. We applaud Majority Leader Harry Reid for his leadership in defending the CTC and for standing firm to ensure that our children do not bear the brunt of our economic problems. And we commend lawmakers on both sides of the aisle for recognizing that, with child poverty at a twenty-year high, we should not be making it harder for parents to meet kids’ basic needs.” 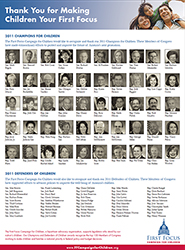 “The child tax credit is one of the most fundamental supports that families have in terms of raising their kids,” said Bruce Lesley, president of FirstFocus, a nonprofit children’s organization in Washington, D.C. “These are families that are paying taxes and that is why they get a credit.”

He said about 5.5 million children in the United States have at least one undocumented parent, but that most of those kids are U.S. citizens themselves.

Nationwide, 22 percent of children live in families with income below the federal poverty level. The child tax credit lifts 1.3 million children out of poverty, according to FirstFocus.

Children of Immigrants Targeted by Tax Warfare in Congress

Currently, the CTC is one federal tax benefit that people can claim using an Individual Tax Identification Number (ITIN) instead of a social security number. This effectively makes it available to undocumented workers—those who lack formal authorization.

Noting that child poverty is already aggravated by the economic crisis, First Focus President Bruce Lesley, President told In These Times, “When a policy makes it harder for children—any children—to succeed, that policy undermines America’s future.”

Members of Congress Recognized as Champions for Children

Apparently, the inhumane treatment enforced by the Department of Homeland Security under departing Secretary Kirstjen Nielsen was not inhumane enough for the Trump Administration, which reportedly is once again considering family separation as a policy option. The so-called “binary option” would force families seeking legal asylum in this country to waive fundamental Flores Settlement protections, clearing the way for the government to warehouse them in unlicensed detention facilities or to force them to turn their children over to the federal government. This is a false choice as both options would cause immense harm to children.

“We call on the President to guarantee that any new secretary — whether acting or confirmed — shall first Do No Harm to children, whether it’s by separating them from their parents or by detaining them,” said Bruce Lesley, president of the advocacy group First Focus Campaign for Children. “The Administration must stop using children as pawns in pursuit of a policy to waylay asylum-seeking families and must only act in the best interest of the child. This cruel and abhorrent strategy violates basic human rights and is not the way a great nation treats children.”

The Administration only recently revealed that it will take two years to reunite the families it broke apart during previous separations under the horrific “zero tolerance” policy. Those separations drew international attention for prying babies from their mother’s arms before deportation and have been deemed “government-sanctioned child abuse” by the American Academy of Pediatrics. They should never be repeated.

In addition, we urge President Trump to abandon calls to eliminate the crucial protections for children offered by the Trafficking Victims Protection Reauthorization Act of 2008 and the Flores Settlement Agreement. These protections are not “loopholes,” as administration officials have called them. Without them, children will suffer horrific prison-like conditions and risk being returned to the dangerous situations from which they fled.

Washington — Today, the First Focus Campaign for Children, a national, bipartisan child advocacy group, recognized 100 Members of Congress for their leadership on issues important to children during 2011.

“Lots of politicians talk about kids’ issues, but few back it up,” said Bruce Lesley, president of the Campaign for Children. Champions and Defenders delivered for kids in 2011.”

Among the honorees, 50 Members were named “Champions for Children,” for their extraordinary efforts to protect and improve the future of America’s next generation. An additional 50 Members were recognized as “Defenders of Children” for their support of policies that advance the well-being of children. The 2011 Champions and Defenders are:

In selecting Champions and Defenders, the First Focus Campaign for Children noted leaders who introduced, co-sponsored, and voted for legislation to meet children’s needs. In addition, the organization considered Members who demonstrated extraordinary initiative by spearheading activities such as sponsoring hearings or garnering the support of their colleagues to improve the health and well-being of children.

For a complete list of 2011 Champions and Defenders and more information, visit www.ffcampaignforchildren.org. 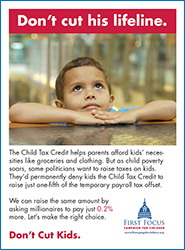 This ad ran in the February 3, 2012, edition of POLITICO. It spotlights an effort by some politicians to raise taxes on children, even as child poverty is at a twenty-year high. To learn more about this threat to the Child Tax Credit and our work to protect kids, read the accompanying fact sheet.

The proposal, offered as a fiscal offset by U.S. House of Representatives negotiators on the payroll tax holiday extension bill, would deny the Child Tax Credit to children whose parents file federal income tax returns using an Individual Tax Identification Number (ITIN). If enacted, it would deny the credit to more than 5.5 million children, four-out-of-five (4.5 million) of whom are U.S. citizen children.

“It is sad that our nation has arrived at the point where we are considering sacrificing the well-being of poor and vulnerable children to pay for our tax breaks,” stated Kevin Appleby, Director of Migration and Public Affairs for the U.S. Conference of Catholic Bishops.

One-in-five children in America (22%) lives in poverty, according to the latest U.S. Census Bureau data – a 20-year high. But poverty is much higher among Latino children: one-in-three Latino children (37%) is poor. Approximately 80 percent of families that would be affected are Latino.

“The elimination of the Child Tax Credit for ITIN filers punishes the most vulnerable segments of our community at the worst possible time,” said Gustavo Torres, Executive Director of CASA de Maryland “Given the economic recession has disproportionately impacted the employment sectors traditionally relied upon by the Latino and immigrant community, this could have a devastating blow on hard-working immigrant families struggling to make it through another month of expenses.”

The Child Tax Credit has proven effective in protecting children from poverty. In 2009, the Child Tax Credit kept the families of more than 1.3 million children above the poverty line. The credit is particularly important for the children of ITIN filers, as their average family income of $21,000 is already below the poverty line (about $22,300) for a family of four. The average child affected by this proposal would lose an estimated $1,800 in family income – more than enough to cover a month’s rent or several months of groceries.

“As a nation we must invest in our children to enjoy future prosperity. Unfortunately, current Congressional attempts threaten to undercut these important investments. We urge Congress to stand up for our children and reject any attempt to strip $1,800 from the pockets of working families at a time when every penny counts,” affirmed Marielena Hincapié, Executive Director of the National Immigration Law Center.

Advocates for America’s Latinos also observe that the proposal comes at a critical moment, as candidates of both parties seek to win the support of Latino voters. The National Council of La Raza (NCLR) reported in 2010 that there were 20 million eligible Latino voters in America and that voter turnout in the 2008 presidential election increased at twice the rate of increase among Blacks and more than 50-times the rate of increase among Whites.

“We are outraged that this proposal is even on the table,” said Eric Rodriguez, NCLR Vice President. “Latino voters are paying close attention to how policymakers treat our community. Given that one out of every four Latino children would face greater hunger and poverty as a result of this proposal, it is hard to see it as anything less than an attack on our children. Congress should pass a fair tax package that maintains access to the Child Tax Credit for vulnerable families.”

Congress has numerous alternatives to offset the budgetary impact of extending the payroll tax holiday. For example, requiring millionaires to pay just 0.2% more in federal income taxes would generate the same offset as denying the Child Tax Credit to 5.5 million children.

“The bottom line for children’s advocates is that it’s wrong to target any child, especially when child poverty’s already at the highest level in a generation. This proposal targets millions of the most vulnerable children in America and threatens to drive child poverty even higher,” stated Bruce Lesley, President of the First Focus Campaign for Children. “And our message to members of Congress: find a smarter solution, and don’t cut kids.”

While most tax filers use a Social Security Number (SSNs), millions of filers use ITINs because they are ineligible for SSNs. Immigrants and nonimmigrant visitors – those admitted through normal channels and those present without documentation – may use ITINs to pay federal income taxes. President George W. Bush’s U.S. Internal Revenue Service Commissioner testified to Congress that undocumented immigrants paid nearly $50 billion in federal income taxes using ITINs, during an eight-year period ending in 2003. The American Immigration Council reports that ITIN filers’ paid more than $9 billion in payroll taxes (which fund Social Security and Medicaid systems for which undocumented immigrants are ineligible) during 2010.

The First Focus Campaign for Children is a 501(c)(4) nonprofit organization affiliated with First Focus, a bipartisan children’s advocacy organization. The Campaign for Children advocates directly for legislative change in Congress to ensure children and families are a priority in federal policy and budget decisions. For more information, visit www.ffcampaignforchildren.org. 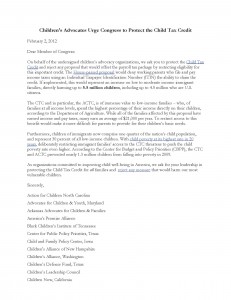 Updated! This letter, signed by over 30 organizations, urges Members of Congress to protect the Child Tax Credit in the face of a House-passed proposal that would deny working parents who file and pay income taxes using an Individual Taxpayer Identification Number (ITIN) the ability to claim the credit.

Activists described as an attack on immigrant children a Republican initiative to eliminate the tax credit that parents are contributing to the treasury without a social security number .

"If the law changes, parents who lack a Social Security number earning $21,000 on average per year, or about $ 10 per hour, will lose an average of $1,800,"  said Janet Murguia, president of the National Council of La Raza (NLCR), at a press conference.

"Any restrictions on the Child Tax Credit make it harder for working parents to cover the basic needs of their children and threaten to increase poverty," said for his part, Wendy Cervantes, vice president of Immigration Policy and Child Rights at First Focus.

Activists call US bill an attack on immigrant children

"Any restrictions on child tax credit harder for working parents to cover the basic needs of their children and also threaten to bring the level of poverty at higher rates," said for his part, Wendy Cervantes, vice president of Immigration Policy Rights of Children and First Focus.