It's great to see growing momentum for federal tax reform ("U.S. Rep. Young discusses tax reform with Indiana businessmen," August 12th). But the debate can't just be about businesses — it must also be about children.

Indiana kids have a lot at stake. Together, just three federal tax provisions — the dependent exemption, the Earned Income Tax Credit, and the Child Tax Credit — account for the biggest federal investment in America's children.

By helping parents meet kids' basic needs, they lift millions of children out of poverty every year. With the number of Indiana kids living poverty up 100,000 from 2007-2011, we can't waste the opportunity to strengthen these protections and build even more effective defenses against child poverty.

But that will only happen if Indiana's congressional delegation sends a clear message to both parties that tax reform must be a win for children. With their leadership, we can build a tax code that invests in kids and make real gains on child poverty.

Bruce Lesley is president of First Focus Campaign for Children. 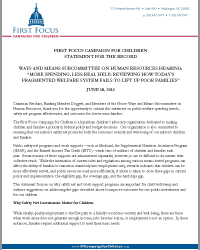 Introduced by Senator Sherrod Brown (OH) and Senator Dick Durbin (IL), the Working Families Tax Relief Act (S. 836), would make permanent critical improvements to the Child Tax Credit (CTC) and Earned Income Tax Credit (EITC) that are currently due to expire in 2017. This bill would preserve access to these key credits for 13 million families and 26 million children nationwide. 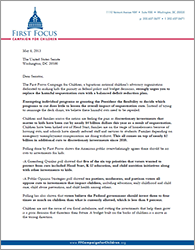 This letter was sent to Senators urging them to reject flexibility and undo sequestration. These harmful cuts have resulted in the loss of over $4 billion to investments that matter to children. 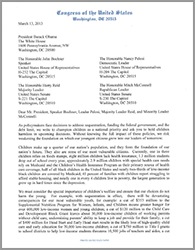 Representative Danny Davis and 51 other members of the House of Representatives signed a letter asking the President and Congressional leadership to hold kids harmless in pending budget decisions. With votes upcoming on funding the government for the remainder of this year and next, sequestration, and the debt ceiling, kids have a lot at stake.

In just 0 days, 0 hours, 0 minutes, and 0 seconds, kids stand to lose billions in the sequester. Intended to be a deadline of arbitrary and unacceptable cuts that would force lawmakers on both sides of the aisle to a compromise in ongoing budget negotiations, the cuts are being used in a game of chicken with devastating consequences for the nation’s most precious resource – our children.

The sequester will cut $85 billion from the federal budget in fiscal year 2013 alone. And while the cuts will be shared between defense and domestic investments, not all cuts are created equal. In an article in today’s BusinessWeek, Heidi Przybyla puts a young human face on the budget cuts:

This means that in just 0 days, 0 hours, 0 minutes, and 0 seconds, our kids will be cut by a whopping $4.2 billion. These cuts seriously threaten many aspects of a child’s life - the safe roof over her head, the education that promises an equal opportunity at success, the nutrition and healthcare she needs to grow strong, and the safe environment she needs to thrive:

The cuts will force 70,000 young children out of Head Start.

The Special Supplemental Nutrition Program for Woman, Infants, and Children (commonly referred to as WIC) will cut about 600,000 participants.

More than 3,000 children will no longer be protected from lead poisoning in their homes.

About 180,000 families will lose access to affordable housing, and could end up homeless.

What does it say about our country’s priorities that we have come within 0 days, 0 hours, 0 minutes, and 0 seconds away from severely harming our children? Already, one in four U.S. kids live in poverty, and the recession has left about one in ten impacted by the foreclosure crisis. Cutting our kids simply doesn’t make sense. As Ronald Brownstein explains in the National Journal:

“[T]he way policymakers achieve balance has profound generational implications too—and the sequester would continue a pattern in which the costs of fiscal adjustment are excessively imposed on the young.”

The right thing to do is hold kids harmless in the budget negotiations. Join the First Focus Campaign for Children in reminding lawmakers of this and that the clock is running out on our kids. Share the tweets above, or write your own using the hashtags #InvestInKids and #TickTock. And contact your Congressional representatives directly using this tool to say, "Don't Cut Kids!".

Because in just 0 days, 0 hours, 0 minutes, and 0 seconds, lawmakers may throw our kids over the cliff. Tick tock.

The Child Tax Credit (CTC) lifts more than a million children out of poverty every year. This fact sheet recommends a CTC "baby bonus" — doubling the CTC for children up to age five. Investing in a child's first few years of life pays off in improved academic performance, which sets the stage for success throughout adult life. And, as this fact sheet details, even modest investments can make a big difference.

Failure to meet the year-end deadline would have resulted in automatic repeal of improvements to the Child Tax Credit (CTC) and the Earned Income Tax Credit (EITC), as well as billions in budget cuts to education, nutrition, and other children’s initiatives. The deal negotiated by the White House and congressional leadership did not include proposals passed earlier by the House of Representatives to remedy the fiscal cliff by imposing other, even more expansive, cuts to children’s health, family tax credits, and nutrition. But the package passed Tuesday simply postpones the automatic “sequestration” budget cuts until March 1, 2013, requiring another round of negotiations with children’s initiatives on the chopping block.

“Republicans and Democrats have two months to reach a long-term budget solution that protects our future by maintaining investments that lift children out of poverty, protect them from hunger, disease, and abuse, and create opportunities for success in school and life,” said Lesley.

The American Taxpayer Relief Act (H.R. 8), which is expected to be enacted by President Obama today, included several major wins for children: 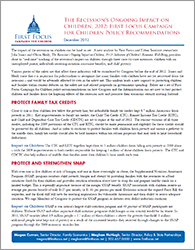 The Earned Income Tax Credit (EITC) and the Child Tax Credit (CTC) are tax credits designed to support low income working families and help them meet their children’s basic needs. At the end of 2012, these tax credits require Congressional action to continue in their current forms and face changes that could have devastating effects on the millions of children who currently receive them.

The Earned Income Tax Credit provides working families who have low levels of earned income with tax credits to supplement their earnings and keep them from falling into deep levels of poverty. The EITC was originally enacted in 1975 and was expanded in 1990, 1993, and 2009. Today it serves as the federal government‘s largest antipoverty program for low income working families. According to the latest rules, adopted in 2009, families with dependent children are eligible for larger credits than adults without children and families with more than two children are eligible to receive an enhanced credit in recognition of the particular needs of larger families.

The Child Tax Credit began in 1997 as a part of the 1997 Taxpayer Relief Act and is designed to specifically mitigate the high cost of raising children and ensure children’s basic needs are met. Under the 2009 provisions of the Child Tax Credit, families are eligible to claim credits if they have dependent children under 17 years old living in their household. Originally the maximum credit that could be claimed under the CTC was set at $400 per child, but it has subsequently been raised to $1000 per child. In order to claim these credits, the taxpayer must have an annual income of at least $3,000.

Today, the Earned Income Tax Credit and the Child Tax Credit are governed by rules set by Congress in 2009. The 2009 provisions were originally scheduled to expire at the end of 2010, but Congress voted to extend these rules through the end of 2012. Once we reach the end of 2012, both the EITC and the CTC will revert back to the rules established in 2003. The 2003 rules for the tax credits differ greatly from the 2009 rules and the current provisions expire, millions of children will see their families’ credits significantly reduced or eliminated altogether. For example, the 2009 provisions of the EITC credit for larger families will be lost. In the CTC, the maximum amount of the credit will be cut in half (from $1000 down to $500 per child) and the earned income threshold, or the amount of income a family must make before becoming eligible for Child Tax Credits, will change from $3,000 under the 2009 rules to $13,300 under the 2003 rules – meaning that many of the lowest earning families with dependent children will lose eligibility.

If the 2009 provisions are allowed to expire, it is estimated that 13 million working families and 26 million childrenacross the United States would lose eligibility for tax credits. These numbers are enormous, and could lead to a substantial increase in the number of people living in poverty in the United States. In my home state of Texas, an estimated 1.5 million working families and 3 million children would lose out in the expiration. In a state with roughly 7 million children under the age of 18, this means that roughly 40 percent of children in Texas will lose benefits from tax credits. This huge percentage highlights the devastating effects that could occur in just one state; the impact that could occur across the nation is just as alarming.

Many families in America are struggling to make ends meet. According to the United States Census Bureau, over15 percent of people in the United States and 22 percent of children (close to 1 in 4 nationwide) lived in poverty in 2011. By reducing the number of working families and children eligible for tax credits, more people are at risk of falling into poverty. In order to avoid this possibility, we need to urge Congress to maintain the 2009 provisions of the Earned Income Tax Credit and the Child Tax Credit. Together, these programs help to reduce child poverty in the United States, something that we can all agree is a priority.

“Latino voters are saying with one loud, clear voice that they want Congress and the White House to invest in our kids,” said First Focus Campaign for Children President Bruce Lesley.

The phone survey was conducted by Lake Research Partners using professional interviewers November 4th through November 6th, 2012. Lake Research Partners reached a total of 1,200 likely, registered voters nationwide, 10 percent of whom were Latino. The sample consisted of 1,000 interviews among all voters who were reached on landline phones and 200 interviews among all voters reached on cell phones. Telephone numbers for the base sample was drawn from a random digit dialing sample and the cell phone sample was drawn from a listed sample. The sample was stratified geographically based on the proportion of likely voters in each region. Data were weighted to reflect the aggregated Presidential vote as reported in the 2012 exit polls, as well as by gender, party identification, marital status, race, and census region. The margin of error at the 95 percent confidence interval is +/- 2.8 percentage points. This margin of error is higher among Latino voters.

Latino voters backed a wide range of federal initiatives to improve the well-being of children at higher levels of support than all voters including:

“Latinos are sending a signal to politicians – you’re out of touch if you’re not leading the charge on children’s issues,” said Lesley.