The First Focus Campaign for Children sent a letter to the Chairperson and Ranking Member of the Senate Judiciary Committee in support of the Juvenile Justice and Delinquency Prevention Reauthorization Act of 2017. 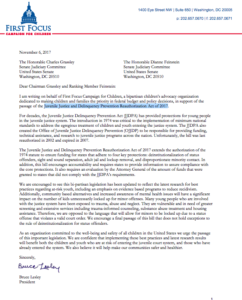 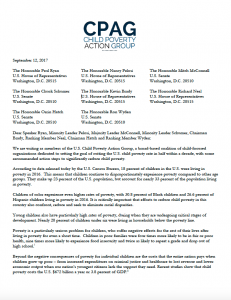 On September 12, 2017 the U.S. Child Poverty Coalition, of which the First Focus Campaign for Children is a member, submitted a letter to Congress highlighting new child poverty data from the U.S. Census Bureau.

The data found that 8.2% of children are living in extreme poverty – that's more than 6 million children. While some of the rates have declined since the prior year, CPAG highlights the need for critical programs that will continue to lift children and families out of poverty. 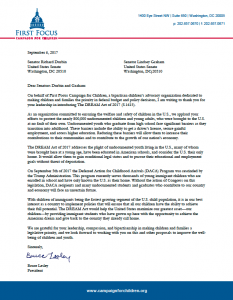 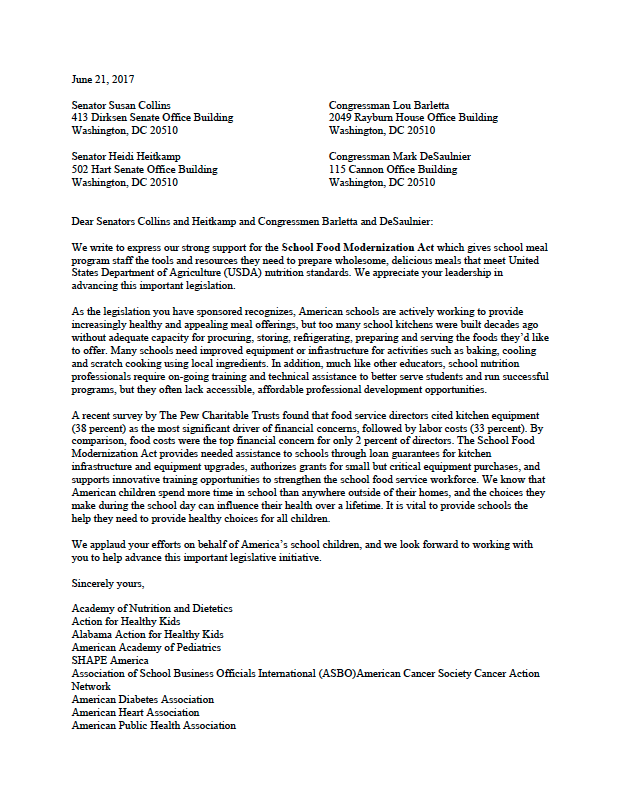 On June 21, the First Focus Campaign for Children–along with several other organizations–submitted this letter to Senators Susan Collins and Heidi Heitkamp, and Representatives Lou Barletta and Mark DeSaulnier for their leadership in introducing the School Food Modernization Act.

This bill is critical to help schools provide healthy food choices for all children. 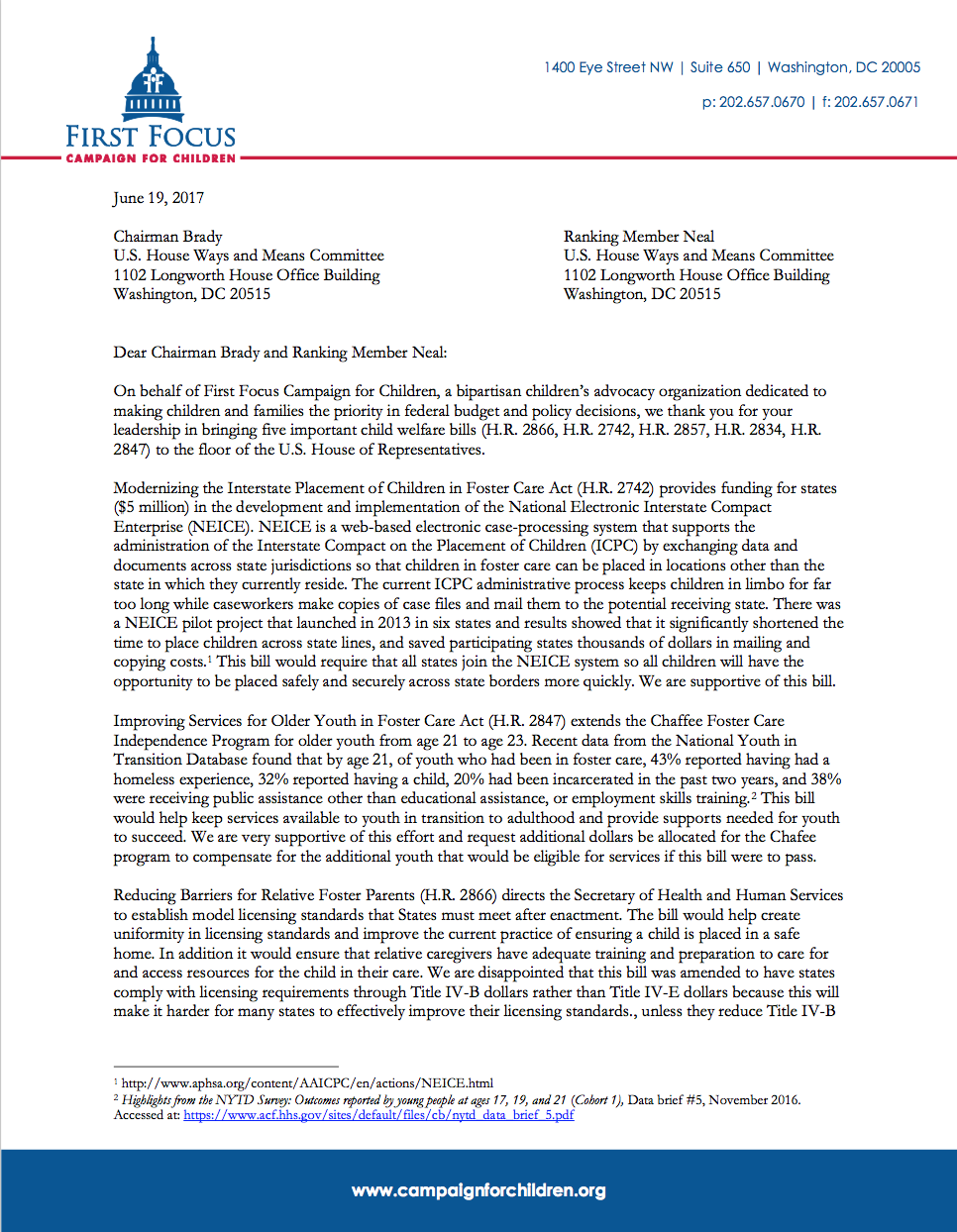 Modernizing the Interstate Placement of Children in Foster Care Act (H.R. 2742) provides funding for states ($5 million) in the development and implementation of the National Electronic Interstate Compact Enterprise (NEICE). NEICE is a web-based electronic case-processing system that supports the administration of the Interstate Compact on the Placement of Children (ICPC) by exchanging data and documents across state jurisdictions so that children in foster care can be placed in locations other than the state in which they currently reside.

Improving Services for Older Youth in Foster Care Act (H.R. 2847) extends the Chaffee Foster Care Independence Program for older youth from age 21 to age 23. This bill would help keep services available to youth in transition to adulthood and provide supports needed for youth to succeed.

Reducing Barriers for Relative Foster Parents (H.R. 2866) directs the Secretary of Health and Human Services to establish model licensing standards that States must meet after enactment. The bill would help create uniformity in licensing standards and improve the current practice of ensuring a child is placed in a safe home. In addition it would ensure that relative caregivers have adequate training and preparation to care for and access resources for the child in their care.

The Partnership Grants to Strengthen Families Affected by Parental Substance Abuse Act (H.R. 2834) was originally introduced to reauthorize the Regional Partnership Grants, which are aimed at improving child well-being, permanency and safety outcomes who are at risk of entering foster care or are currently in an out- of-home placement due to a parent’s substance use.

The Supporting Families in Substance Abuse Treatment Act (H.R. 2857) allows family foster care maintenance payments for children placed with a parent in a licensed residential family-based treatment facility for substance abuse. This bill has been amended to cap the amount of foster care maintenance payments families in residential treatment can receive, instead of allowing the full cost to be reimbursed through IV-E dollars.

Read the letter of support here. 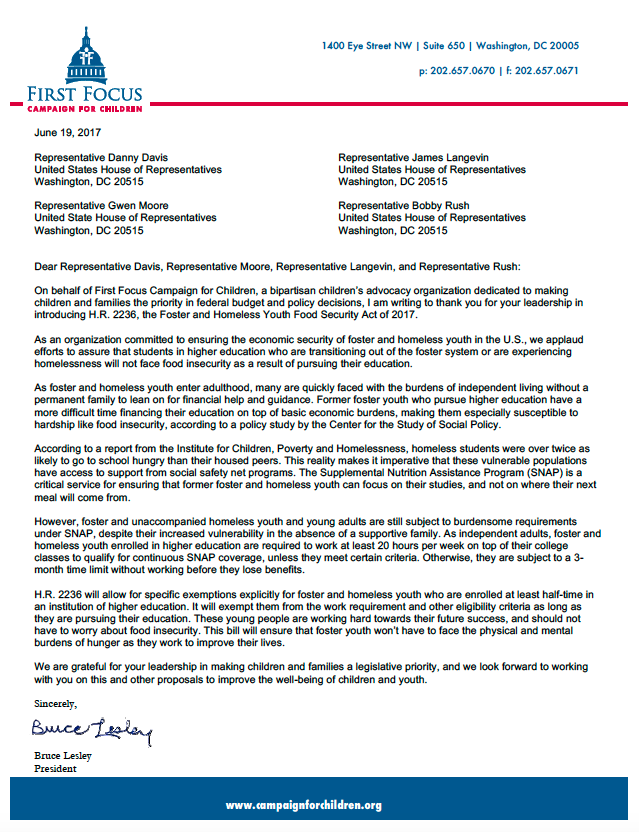 On June 19th, the First Focus Campaign for Children submitted a letter to Reps. Danny Davis, James, Langevin, Gwen Moore and Bobby Rush, for their support on the Foster and Homeless Youth Food Security Act of 2017 (HR 2236).

The bill will allow for specific exemptions explicitly for foster and homeless youth who are enrolled at least half-time in an institution of higher education. It will exempt them from the work requirement and other eligibility criteria as long as they are pursuing their education. This bill will ensure that foster youth won’t have to face the physical and mental burdens of hunger as they work to improve their lives.

Letter of Support for Raise the Wage Act 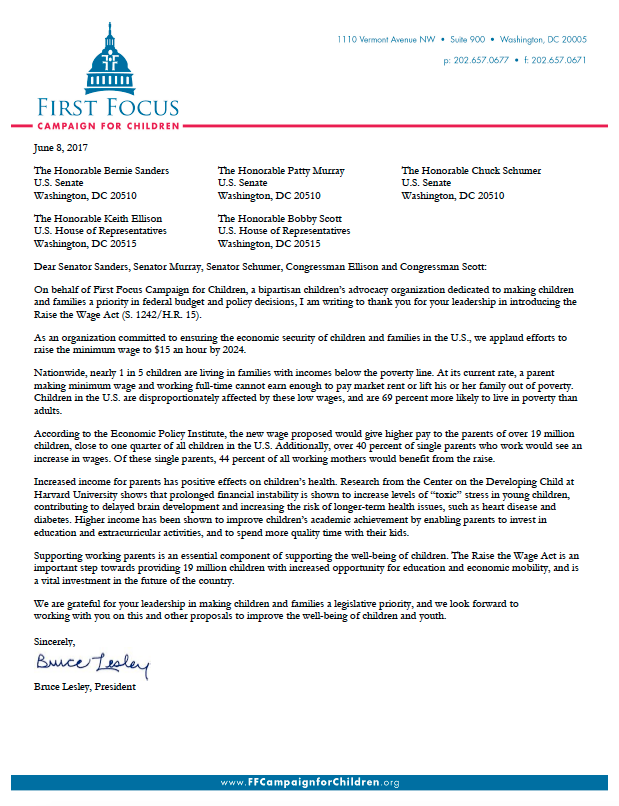 The First Focus Campaign for Children sent a letter of support today to the lead Congressional sponsors of the Raise the Wage Act (S.1242 / H.R.15).

This bill would raise the federal minimum wage to $15 an hour by 2024, helping millions of working parents and their children. 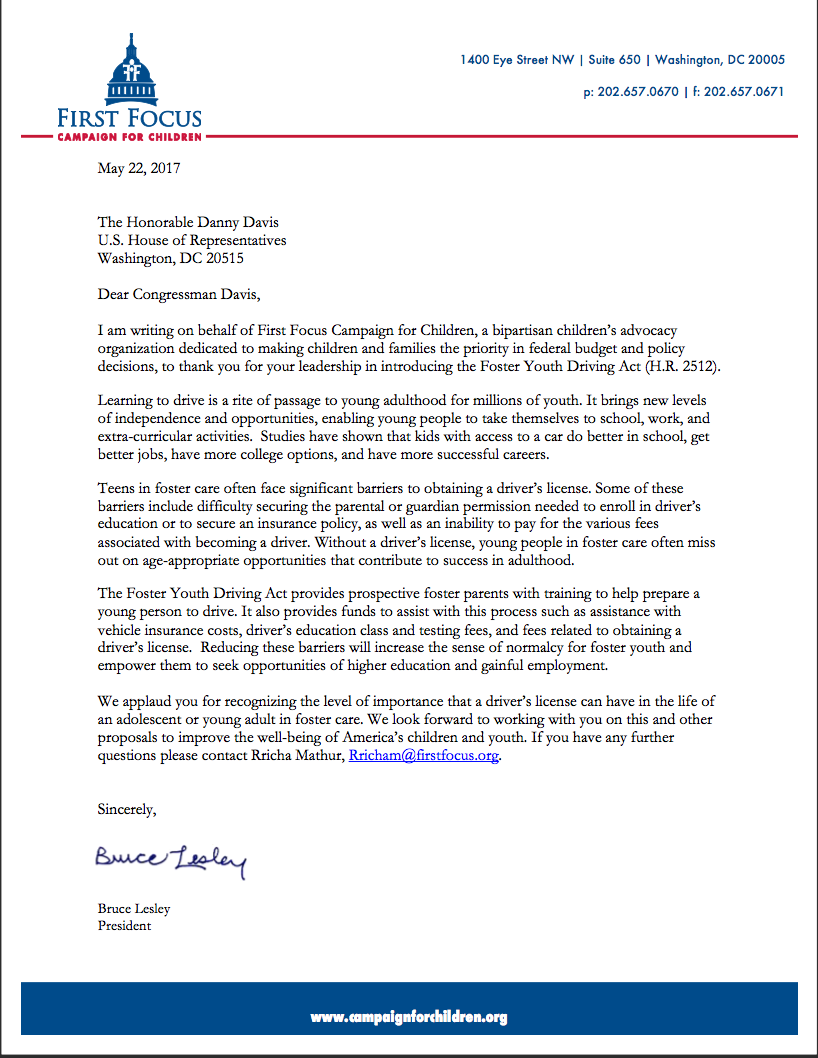 The First Focus Campaign for Children sent a letter to Rep. Danny Davis (IL-7) in support of his introduction of the Foster Youth Driving Act (HR 2512).

This legislation provides prospective foster parents with training to help prepare a young person to drive.

It also provides funds to assist with such things as vehicle insurance costs, driver’s education classes, testing fees, and costs related to obtaining a license.

Reducing these barriers will increase the sense of normalcy for foster youth and empower them to seek opportunities of higher education and gainful employment.

This legislation would ban schools from stigmatizing children whose parents cannot afford to pay for their school lunches and require schools to direct communications about unpaid school lunch bills to the parent, rather than penalizing the child.

On May 11, 2017, the Children's Budget Coalition submitted a letter to Congress (House / Senate) urging policymakers to consider the needs of America's youngest citizens when writing the 2018 budget. 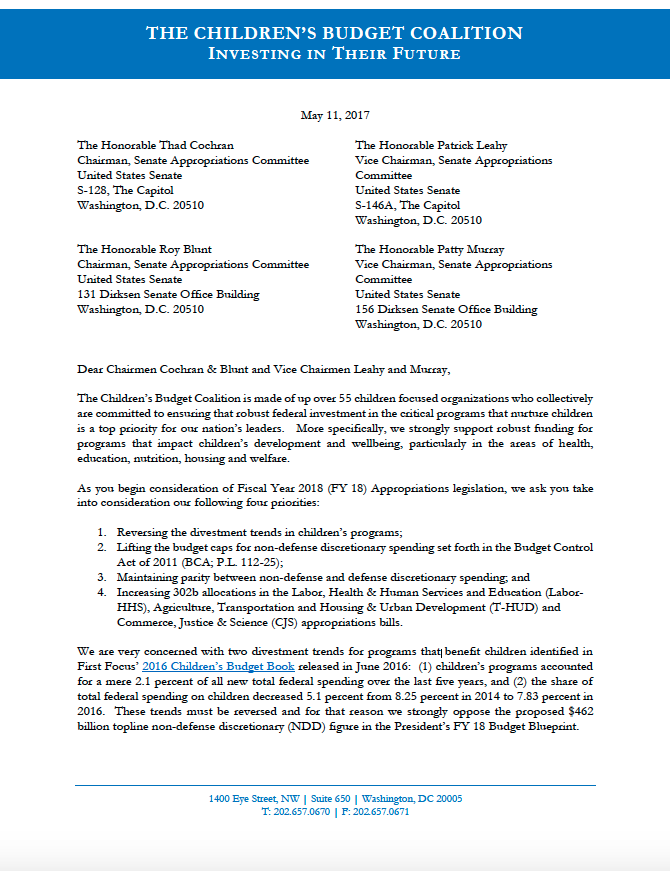 More than 55 organizations signed on to the letter, which asks Congress to consider four top priorities:

3. Maintaining parity between non-defense and defense discretionary spending; and

Read the press release here, and the letters to the House and the Senate.