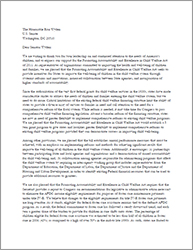 The First Focus Campaign for Children has endorsed the Promoting Accountability and Excellence in Child Welfare Act (S. 1509), introduced by Senator Wyden (D-OR). This endorsement letter accompanies a fact sheet outlining the constraints impost on states by current federal funding systems and the bill's reforms to improve state flexibility and responsiveness. 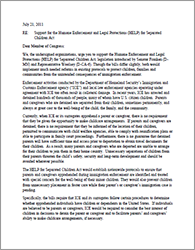 This letter, signed by over 170 organizations, urges Members of Congress to support the Humane Enforcement and Legal Protections (HELP) for Separated Children Act, legislation introduced by Senator Franken (D-MN) and Representative Woolsey (D-CA-6).

May 31, 2011: To Members of Congress Opposing the State Flexibility Act

This letter by the First Focus Campaign for Children addressed to Members of Congress voices strong opposition to H.R. 1683/S. 868, the “State Flexibility Act.”

This legislation would take a massive step in the wrong direction for children’s health care, as the bill puts at risk the health coverage of an estimated 14 million children with Medicaid and Children’s Health Insurance Program (CHIP) coverage and would fundamentally reverse the enormous progress our nation has made over the last 14 years in reducing the number of uninsured children in our nation.

Eighty-nine child advocacy groups signed on to a letter to Senator Dodd (D-CT) and Senator Casey (D-PA) in support of the Children’s Act of 2010 (S. 3968). This piece of legislation would establish a National Council on children which would function as a federal entity and annually assess the health, education, and overall well-being of our children.

National Sign-On in support of the DREAM Act 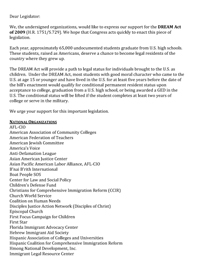 In this letter, National and state-based organizations expressed their support for the DREAM Act of 2009 (H.R. 1751/S.729). They urge Congress to act quickly to enact this piece of legislation as each year, approximately 65,000 undocumented students graduate from U.S. high schools. These students, raised as Americans, deserve a chance to become legal residents of the country where they grew up. 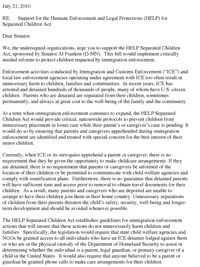 Hundreds of national and state-based organizations signed-on to this letter urging Members of Congress to support the Humane Enforcement and Legal Protections for Separated Children Act, sponsored by Representative Lynn Woolsey (D-CA). This bill would implement critically needed reforms to protect children, families and communities impacted by immigration enforcement.

Sign-On in Support of the DREAM Act 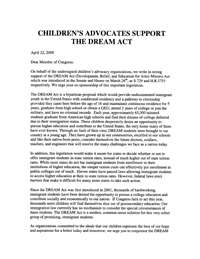 This letter, signed by children’s advocacy organizations, demonstrates their strong support for the DREAM Act, which was introduced in the Senate and House on March 26th, 2009. The letter urges members to show their support by co-sponsoring this important legislation. 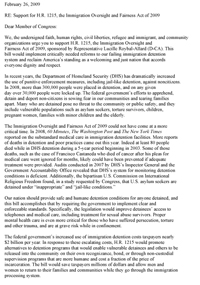 Signed by faith, human rights, civil liberties, refugee and immigrant, and community organizations, this letter urges Members of Congress to support H.R. 1215, the Immigration Oversight and Fairness Act of 2009, sponsored by Representative Lucille Roybal-Allard (D-CA). This bill would implement critically needed reforms to our failing immigration detention system and reclaim America’s standing as a welcoming and just nation that accords everyone dignity and respect.