In the News: The Democrats' Luck Runs Out

After a run of unlikely victories last month, it seemed possible for Democrats to forget—at least momentarily—that they were the party shut out of power in Washington.

They had watched in gleeful relief as Republicans failed yet again to repeal the Affordable Care Act. Democratic leaders Nancy Pelosi and Charles Schumer had persuaded President Trump to abandon the GOP leadership in a fiscal agreement, and they were poised to strike yet another favorable deal on immigration. Republicans were mired in the kind of infighting that usually follows defeat.

Yet the last two weeks have tested the limits of the Democrats’ leverage, offering them bitter reminders that success for the minority party is relative, and often fleeting. On Sunday, Trump laid out a list of hard-line demands on immigration that seemed to extinguish hopes for a quick agreement to shield young undocumented immigrants from the threat of deportation. Then, on Monday, Scott Pruitt, the administrator of the U.S. Environmental Protection Agency, announced that the EPA would fully repeal the Obama administration’s Clean Power Plan to combat climate change. And on Thursday, Trump signed an executive order that could ultimately...READ MORE.

In the News: Congress Can’t Get Its Sh*t Together and It’s Putting Kids at Risk

From The Daily Beast:

Ever since mid-September, Emily Piper has been on high alert.

The commissioner of the Minnesota Department of Human Services drafted a letter to Minnesota’s congressional delegation on the 13th warning that funding for the state’s Children’s Health Insurance Program (CHIP) would run out soon and the state would have to “take extraordinary measures” to ensure coverage continued after the end of the month.

Congress, ultimately, did not act—leaving the fate of some 9 million children who depend on the program nationwide up in the air. And through the start of October, local officials like Piper have had to determine how to maintain coverage for the recipients while anxiously...READ MORE. 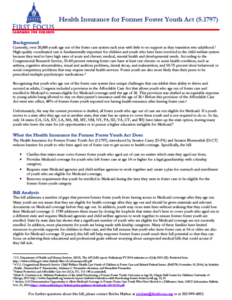 Currently, over 20,000 youth age out of the foster care system each year with little to no support as they transition into adulthood. High-quality coordinated care is fundamentally important for children and youth who have been involved in the child welfare system because they tend to have high rates of acute and chronic medical, mental health and developmental needs. According to the Congressional Research Service, 35-60 percent entering foster care have at least one chronic or acute health condition, such as asthma, cognitive abnormalities, visual and auditory problems, dental decay, and malnutrition, and 50-75 percent show behavioral or social competency problems that may require mental health services. Foster youth are also more likely than their peers to be prescribed multiple psychotropic medications.

The Health Insurance for Former Foster Youth Act (S.1797), introduced by Senator Casey (D-PA) and Senator Blumenthal (D-CT) reduces barriers for youth to who have aged out of foster care to get access to health coverage.

WASHINGTON—The First Focus Campaign for Children welcomes today’s passage through the Senate Finance Committee of the KIDS Act of 2017 (S.1827), which includes a five- year extension of funding for the popular Children’s Health Insurance Program (CHIP). We are also pleased the House is marking up the HEALTHY KIDS Act of 2017 (H.R. 3921), which includes a similar five-year CHIP extension and other key provisions such as a guarantee of affordability standards and extensions of outreach and enrollment grants, pediatric quality measures, and Express Lane Eligibility that will help millions of children access high-quality care.

The two bills also sunset a provision in the 2015 extension of CHIP that resulted in $1 billion being stripped out of the program as of September 30, 2017, so that they will not happen again in the future.

We are concerned, however, about offsets in the House bill that would harm other critical programs benefitting American children and families. We urge Congress to identify offsets for the HEALTHY KIDS Act that reflect the bipartisan nature of CHIP and which do not hurt other safety net programs.

“Congress must get this done quickly and with great urgency. We’re encouraged by the action in the House and Senate on the five-year extension of CHIP, but urge members to make sure the final legislation doesn’t pay for CHIP by taking funds away from other vital programs that benefit kids.

After missing the deadline, Congress has left millions of American families in limbo, worrying about their children’s health coverage.

Congress’ failure to act before the deadline means states have to send disenrollment notices to struggling families and figure out ways to stretch their remaining federal dollars as long as possible. Some may be able to keep kids covered a few months, while others only have a few weeks.

Congress has a strong agreement on the policy to extend CHIP for five years and must act soon. Time is of the essence.”

Created in 1997, CHIP, along with Medicaid, has helped reduce the number of uninsured American children by a remarkable 68 percent, with more than 95 percent of all kids in the U.S. currently enrolled in some form of insurance coverage. CHIP covers nearly 9 million low-income American children and 370,000 pregnant women.

In the News: Congress threatens to take health insurance away from 9 million kids, just because

A program that provides health coverage to some nine million children was allowed by the Republican-controlled Congress to expire over the weekend.

The Children’s Health Insurance Program, or CHIP, a bipartisan initiative that was originally co-sponsored by Republican Sen. Orrin Hatch and the late Ted Kennedy in the 1990s, allows children who fall above the Medicaid threshold to obtain low-cost health insurance.

Republicans diverted nearly all attention to another failed Obamacare repeal attempt. The bill’s co-sponsors, Sens. Lindsey Graham, R-S.C., and Bill Cassidy, R-La., claimed to have momentum on their side and enough votes to pass the measure, but that turned out to be false, as the effort fell short of even the mark set by the previous failed effort. Graham later acknowledged he had no idea what he was doing.

Democrats in Congress and around the country, however, fully...READ MORE.

In the News: 9 Million Kids Could Soon Be Without Free Or Low-Cost Health Insurance

From Jezebel's THE SLOT:

In the midst of their bid to rip health insurance from millions of Americans under the now-failed Graham-Cassidy bill, Republicans allowed the Children’s Health Insurance Program (CHIP) to expire, leaving 9 million kids waiting for their states to run out of money that provides them with free or low-cost health coverage.

CHIP was a popular, bipartisan measure that passed under President Bill Clinton in 1997; it was sponsored by Sen. Orrin Hatch (R-Utah) and the late Ted Kennedy (D-Massachusetts), and was last renewed in 2015. It provides low-cost health coverage for kids whose families don’t qualify for Medicaid but can’t afford to cover their healthcare costs, and has brought the uninsured rate for children down to 4.5 percent. The program is mostly funded by the federal government, and without reauthorization...READ MORE.

Created in 1997, CHIP, along with Medicaid, has helped reduce the number of uninsured American children by a remarkable 68 percent, with more than 95 percent of all kids in the U.S. currently enrolled in some form of insurance coverage.

"Instead of focusing their resources on the health and well-being of the 9 million children and pregnant women CHIP covers, many states are now being forced to waste taxpayer dollars on actions to end the popular program.

Congress’ failure to act before the deadline means states have to send disenrollment notices to struggling families and figure out ways to stretch their remaining federal dollars as long as possible. Some may be able to keep kids covered a few months, while others only have a few weeks.

It was irresponsible for Congressional leaders to leave Washington last week without renewing funding for a successful and effective program that has always enjoyed support from Republicans and Democrats.

There is a bipartisan bill sitting on their desks that will extend CHIP funding for five years: The Keep Kids’ Insurance and Dependable Secure Act (KIDS). We urge Congress to pass it immediately so millions of families don’t continue living with the uncertainty of losing health coverage for their kids."

In the News: As CHIP expires unrenewed, Congress blows a chance to save healthcare for 9 million children

From The LA Times:

Advocates for children’s health started worrying months ago that congressional incompetence would jeopardize the nation’s one indisputable healthcare success — the Children’s Health Insurance Program, which has reduced the uninsured rate among kids to 5% from 14% over the two decades of its existence.

Their fears turned out to be true. Funding for CHIP runs out on Saturday, and no vote on reestablishing the program’s $15-billion appropriation is expected for at least a week, probably longer. That’s the case even though CHIP is one of the few federal programs that has enjoyed unalloyed bipartisan support since its inception in 1997. The consequences will be dire in many states, which will have to curtail or even shut down their children’s health programs until funding is restored. Hanging in the balance is care for 9 million children and pregnant women in low-income households.

What happened? The simple answer is that congressional Republicans’ last harebrained attempt to repeal the Affordable Care Act got in the way. A funding bill for CHIP seemed to be well on its way to enactment until a week or so ago. That’s when the effort to pass the egregious Cassidy-Graham repeal bill sucked all the air out of the legislative room.

There are huge ramifications in pretty much every state across the country.— Bruce Lesley, president of children's advocacy group First Focus.

Agreement on a bill had been reached in mid-September by Sens. Orrin Hatch (R-Utah) and Ron Wyden (D-Ore.). “Momentum was building,” says Bruce Lesley, president of First Focus, a children’s advocacy group in Washington. Then came Cassidy-Graham, and “we couldn’t even get a meeting,” Lesley says. “No one was even taking our calls.” ...READ MORE. 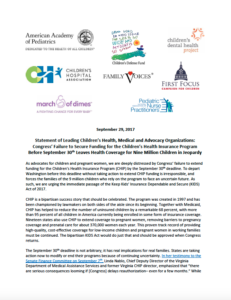 paign for Children, along with several children's advocacy groups, released a joint statement today on the impact of Congress' failure to pass the Children's Health Insurance Program (CHIP) by the September 30th deadline.

WASHINGTON—The First Focus Campaign for Children welcomed the announcement by Senate Majority Leader Mitch McConnell (R-KY) today not to hold a vote on the Graham-Cassidy healthcare bill, putting an end to their efforts to repeal and replace the Affordable Care Act (ACA) for now.

“We’re glad to see the most damaging of all the repeal and replace bills suffer the same fate as the others. The American people have spoken again. Put simply, they want a healthcare solution that both sides can agree on. One that prioritizes the well-being of children and families and improves the lives of Americans.

As it turns out, there’s an urgent and immediate opportunity to improve the lives of nine 9 million low-income American children and pregnant women by extending funding for the Children’s Health Insurance Program (CHIP), which expires on Saturday.

CHIP is a popular, bipartisan, and successful 20-year-old program that has been awaiting action by Congress that was delayed by attempts to repeal and replace the ACA.

But the 9 million kids who rely on CHIP can no longer wait – it’s time for Congress to step up and protect children’s health coverage and pass the bipartisan CHIP extension bill (S.1827) before the deadline at the end of this week."