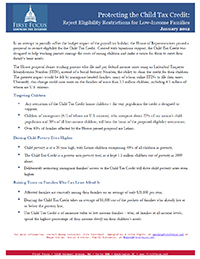 The bipartisan Child Tax Credit was designed to help families manage the costs of raising children and make it easier for them to meet basic needs. A proposal advancing in the House of Representatives could undermine the CTC and raise taxes on the families of more than 4.5 million U.S. citizen children. 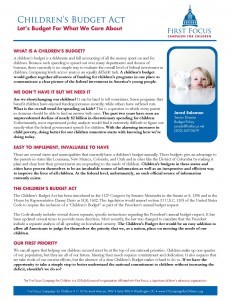 A children’s budget is a deliberate and full accounting of all the money spent on and for children. Because such spending is spread out over many departments and dozens of bureaus, there currently is no simple way to evaluate the overall level of federal investment in children. Comparing levels across years is an equally difficult task. A children’s budget would gather together all sources of funding for children’s programs in one place to communicate a clear picture of the federal investment in America’s young people. 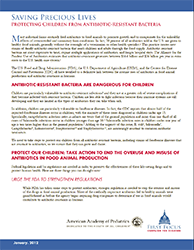 Children face higher risks from antibiotic resistant infections than adults. We partnered with the American Academy of Pediatrics to develop this joint fact sheet, explaining why and offering concrete recommendations for how to save precious lives. 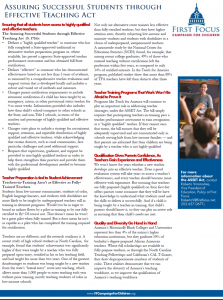 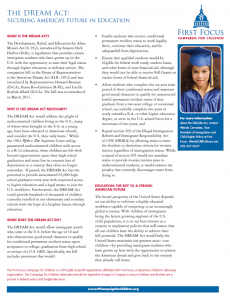 The Development, Relief, and Education for Alien Minors Act (S. 952), introduced by Senator Dick Durbin (D-IL), is legislation that provides certain immigrant students who have grown up in the U.S. with the opportunity to earn their legal status through higher education or military service. The companion bill in the House of Representatives is the American Dream Act (H.R. 1842) and was introduced by Representatives Howard Berman (D-CA), Ileana Ros-Lehtinen (R-FL), and Lucille Roybal-Allard (D-CA). The bill was re-introduced in March 2011. 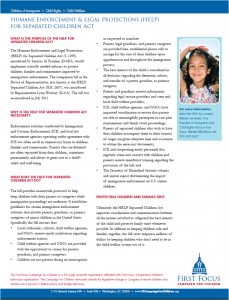 The Humane Enforcement and Legal Protections (HELP) for Separated Children Act (S. 1399), introduced by Senator Al Franken (D-MN), would implement critically needed reforms to protect children, families and communities impacted by immigration enforcement. The companion bill in the House of Representatives, also known as the HELP Separated Children Act (H.R. 2607), was introduced by Representative Lynn Woolsey (D-CA). The bill was re-introduced in July 2011. 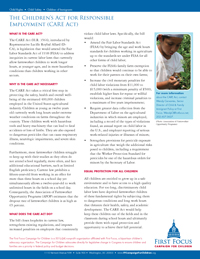 Introduced by Representative Lucille Roybal Allard (D-CA), The CARE Act is legislation that would amend the Fair Labor Standards Act of 1938 (FLSA) to address inequities in current labor laws that currently allow farmworker children to work longer hours, at younger ages, and in more hazardous conditions than children working in other sectors. This fact sheet provides an overview of the legislation and outlines the impact it will have on children and families.

The State Flexibility Act Harms Children, Disrupts Coverage, and Ends CHIP as We Know It 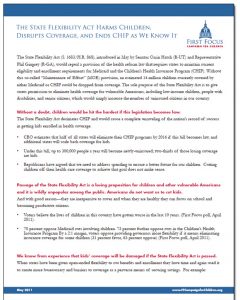 The State Flexibility Act (S. 1683/H.R. 868), introduced in May by Senator Orrin Hatch (R-UT) and Representative Phil Gingrey (R-GA), would repeal a provision of the health reform law that requires states to maintain current eligibility and enrollment requirements for Medicaid and the Children’s Health Insurance Program (CHIP). Without this so-called “Maintenance of Effort” (MOE) provision, an estimated 14 million children currently covered by either Medicaid or CHIP could be dropped from coverage. The sole purpose of the State Flexibility Act is to give states permission to eliminate health coverage for vulnerable Americans, including low-income children, people with disabilities, and senior citizens, which would simply increase the number of uninsured citizens in our country.

This fact sheet outlines the ways in which the State Flexibility Act will impact children's health care coverage.

Promoting Accountability and Excellence in Child Welfare Act of 2011 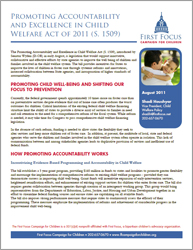 The First Focus Campaign for Children supports the Promoting Accountability and Excellence in Child Welfare Act (S. 1509), introduced by Senator Wyden (D-OR). This fact sheet outlines the constraints impost on states by current federal funding systems and the bill's reforms to improve state flexibility and responsiveness.

What the Tax Compromise Means for Children and Working Families

The United States Senate is considering the Reid Tax Relief, Unemployment Insurance Reauthorization and Job Creation Act based on the Tax Compromise announced by President Obama on December 6. This fact sheet outlines the provisions that will help children and working families, including the extension of Unemployment Insurance, expansions of the Child Tax Credit, Earned Income Tax Credit, Child and Dependent Care Credit, and a payroll tax cut.