As the letter observes, the bill makes important improvements:

“The Senate must pass this bill to keep making progress toward reform,” said Lesley.

The letter notes that the legislation is not perfect. If adopted by the Senate, both chambers of Congress would appoint bipartisan “conference committee” negotiators tasked with developing a final package. The Campaign for Children urged lawmakers to consider specific improvements:

“No Child Left Behind failed because Congress matched high expectations with lowball funding – the question now is whether Congress has learned its lesson,” said Lesley.

Breaking News: Preschool for all 4-year-olds on the table

Access to high-quality preschool for all 4-year-olds in low-income families is being considerered as an amendment to the Elementary and Secondary Education Act funding bill. Take action now »

Decades of research proves that children who attend high-quality preschool are less likely to be held back in school, require remedial education, engage in criminal activity, or become dependent on public assistance later in life. And they are more likely to graduate from high school and earn more as adults. Despite these benefits, millions of children from low-income families lack access to high-quality preschool.

We are excited to report that high-quality, full-day preschool for all low-income 4-year-olds was just offered by Senator Bob Casey (D-PA) in an amendment to the education funding bill. The Senate is debating this legislation this week, so we need to take action immediately. There are a couple of ways to take action. END_OF_DOCUMENT_TOKEN_TO_BE_REPLACED

Support for the Commission on Native Children Act 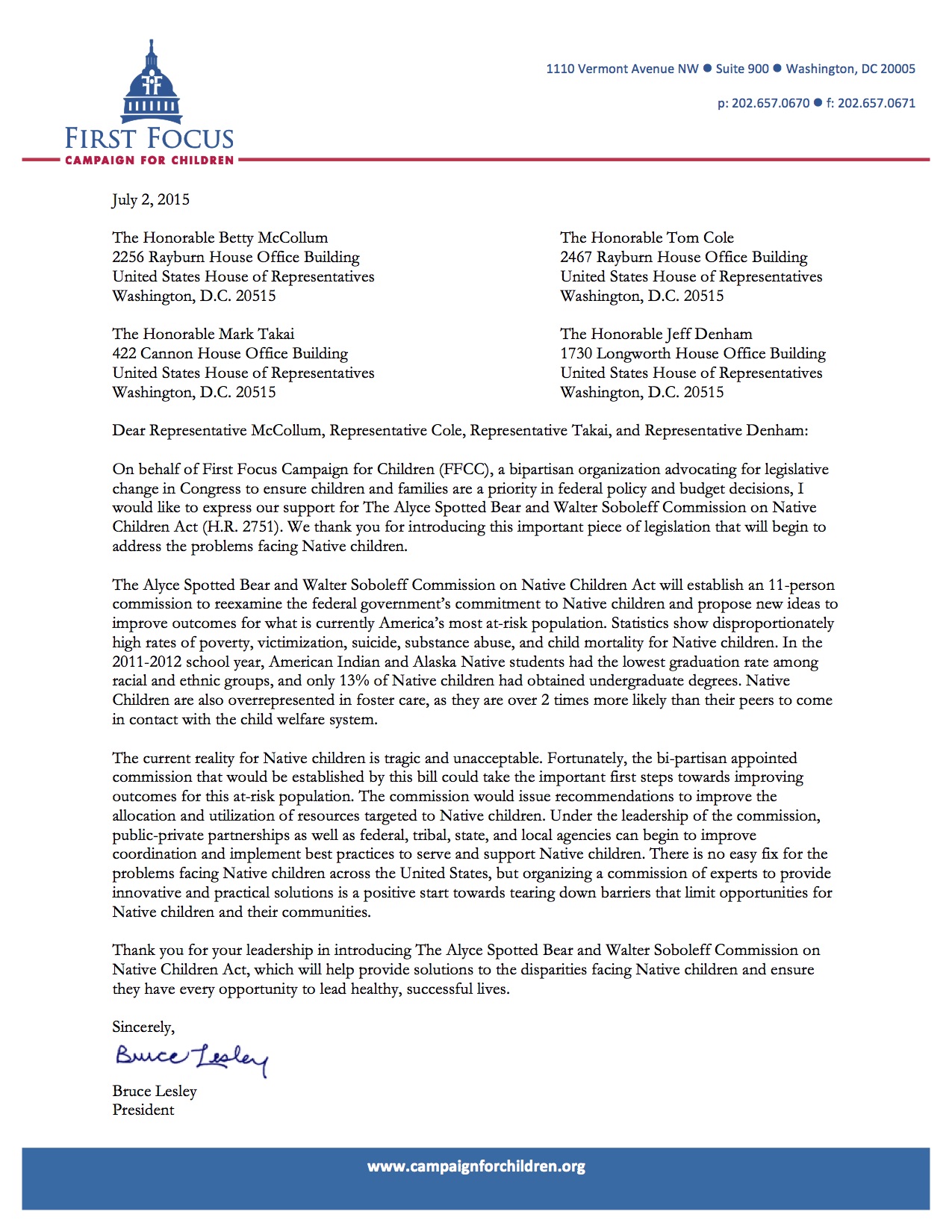 On July 2nd, 2015, First Focus Campaign for Children sent this letter in support of The Alyce Spotted Bear and Walter Soboleff Commission on Native Children Act (H.R. 2751). The act would establish an 11-person committee to reexamine the federal government's commitment to Native children, and propose policy solutions to better serve them. If adopted, this bill could dramatically improve the lives of Native kids nationwide. 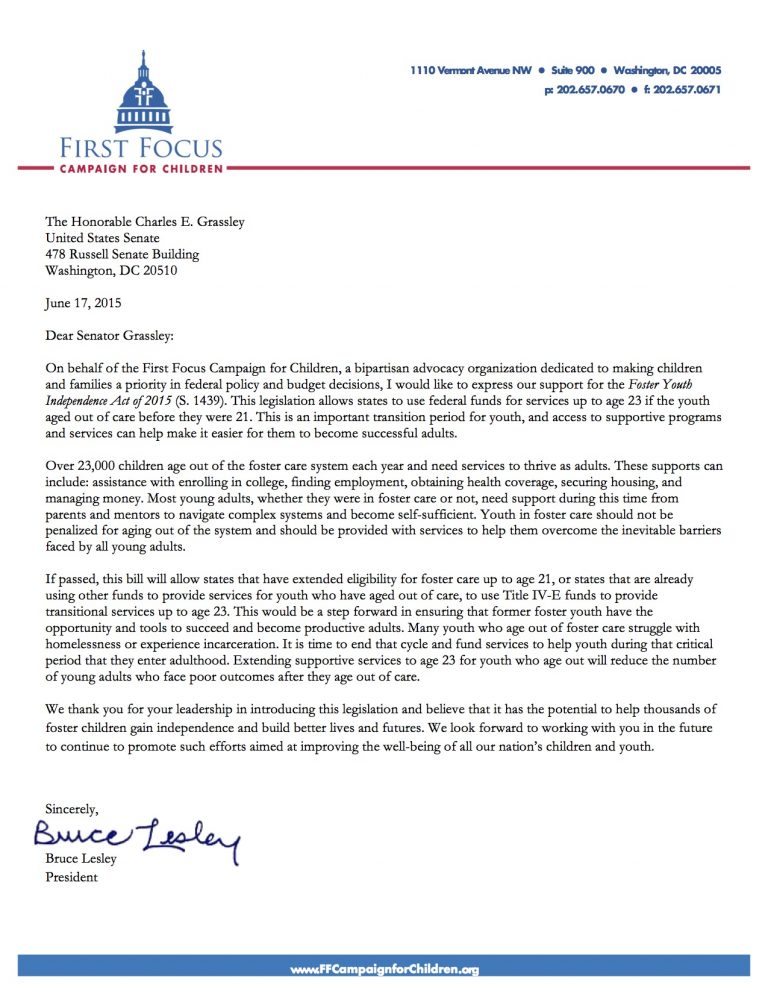 On June 17, 2015 the First Focus Campaign for Children sent this letter in support of the Foster Youth Independence Act of 2015. This bill extends federal funding for services for youth up to age 23 who age out of foster care. These services can include: assistance with enrolling in college, finding employment, obtaining health coverage, securing housing, and managing money.

Why a child poverty target is good education policy 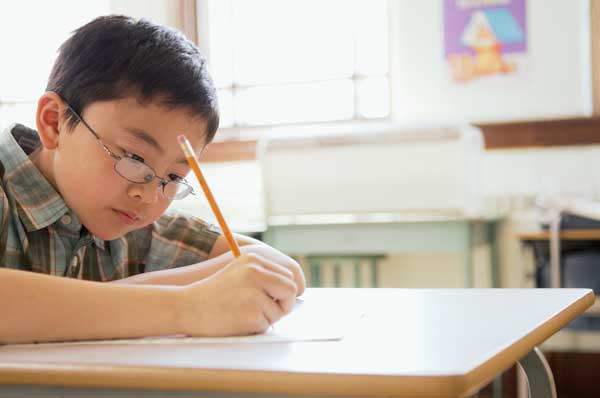 While both the House and Senate continue work on the Elementary and Secondary Education Act (ESEA, the primary federal education legislation), Congressman Danny Davis (D-IL), Congressman Gerry Connolly (D-VA), Congresswoman Barbara Lee (D-CA), and Congressman Elijah Cummings (D-MD) introduced a bill that would have a major positive impact on children’s education, but it falls outside the jurisdiction of the education committees and does nothing to amend ESEA.

The Child Poverty Reduction Act of 2015 (H.R. 2408), introduced on May 19, 2015, would establish a national goal of cutting child poverty in half in ten years and eliminating it in 20. To help achieve these goals, it would also authorize an interagency working group to develop a plan to meet these targets and request a study from the National Academy of Sciences to assist in developing a plan to reduce child poverty.

This legislation is important for children’s education because of the well-researched impact of poverty on children’s academic achievement, likelihood to graduate from high school, and pursue higher education. Children living in or near poverty experience toxic stress (which continues to affect children well beyond their early years), instability, community violence, and other environmental hazards like lack of heat in their homes. What does this all mean for children’s education? Higher rates of absenteeism; inability to concentrate on schoolwork; increased likelihood of depression; reduced motivation, determination, cognition, and memory; diminished social skills; and ultimately lower academic achievement and a higher risk of not finishing high school.

END_OF_DOCUMENT_TOKEN_TO_BE_REPLACED

Support for the Housing for Homeless Students Act of 2015 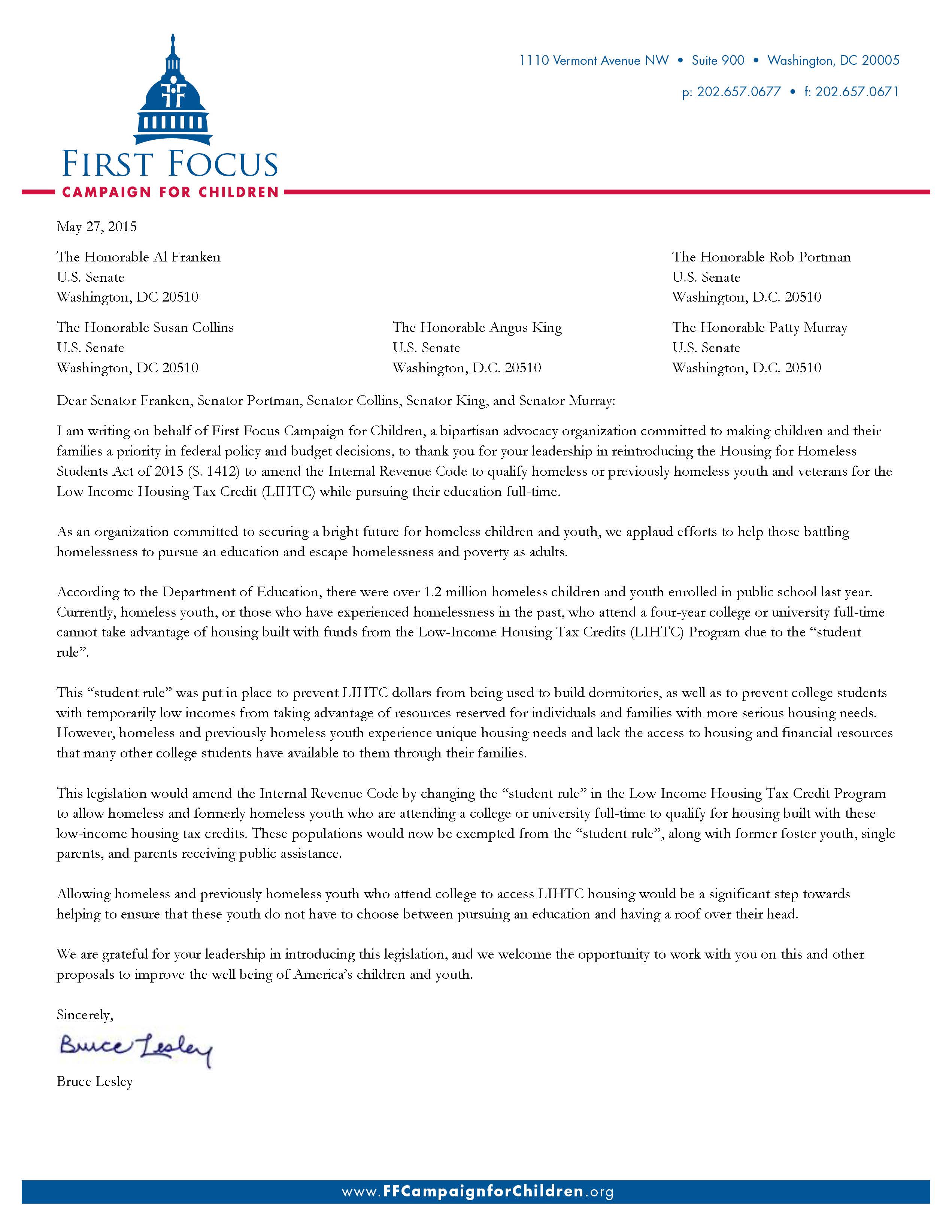 According to the Department of Education, there were over 1.2 million homeless children and youth enrolled in public school last year. Currently, homeless youth, or those who have experienced homelessness in the past, who attend a four-year college or university full-time cannot take advantage of housing built with funds from the Low-Income Housing Tax Credits (LIHTC) Program due to the “student rule.” The Housing for Homeless Students Act of 2015 (S. 1412) to amend the Internal Revenue Code to qualify homeless or previously homeless youth and veterans for the LIHTC while pursuing their education full-time.

It’s encouraging that Wichita is making progress on homelessness (“Yearly count finds 11% fewer homeless in city,” May 6 Eagle), but the numbers may not be as encouraging as the U.S. Department of Housing and Urban Development wants us to believe.

Nearly a million homeless children lead transient lives – hotel one night, a friend’s couch the next. That includes more than 9,300 children attending Kansas schools, according to the U.S. Department of Education. The roof over their heads isn’t theirs, and they may lose it tomorrow. In every way that matters, they’re homeless... 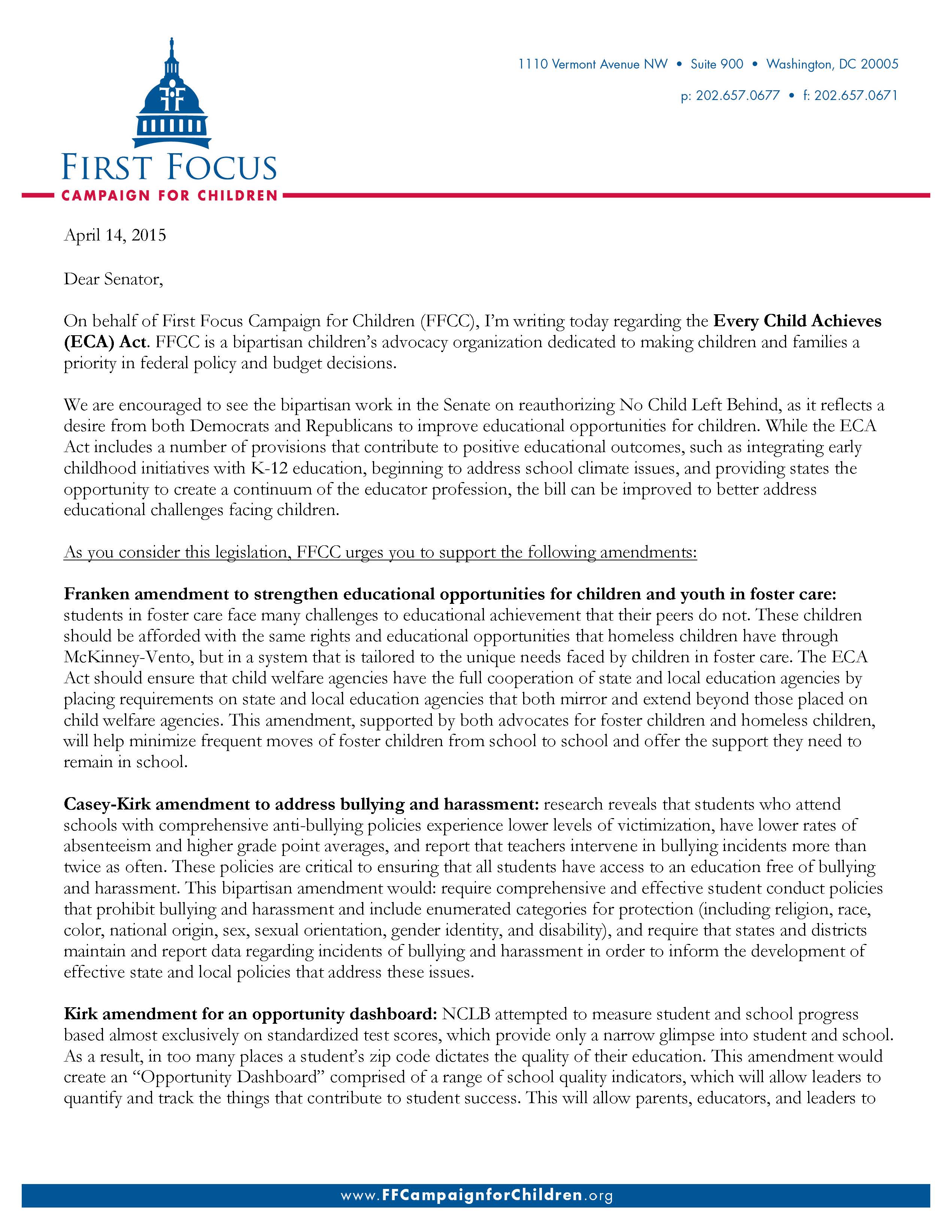 First Focus Campaign for Children sent this letter to the Senate Health, Education, Labor and Pensions Committee on April 14, 2015, in advance of their markup of the Every Child Achieves Act to reauthorize No Child Left Behind. The letter provides a list of amendments for members to support to strengthen the bill to provide more educational opportunities for all children, and a number of amendments that would weaken the bill, which we urge members to reject.

A 2013 First Focus analysis on the higher education barriers facing immigrant students. The report, Access to Education: Challenges and Opportunities for Immigrant Students, highlights the potential gains from improved in-state tuition access and the elimination of federal obstacles for immigrant students.

In response to the bill’s introduction, the First Focus Campaign for Children released the following statement by its president, Bruce Lesley:

“America wins when every young person has an opportunity to reach his or her full potential and contribute to our nation’s success. Eliminating the barriers to children’s success is the best way to build a strong and vibrant future for America.”

Returning No Child Left Behind to its Roots 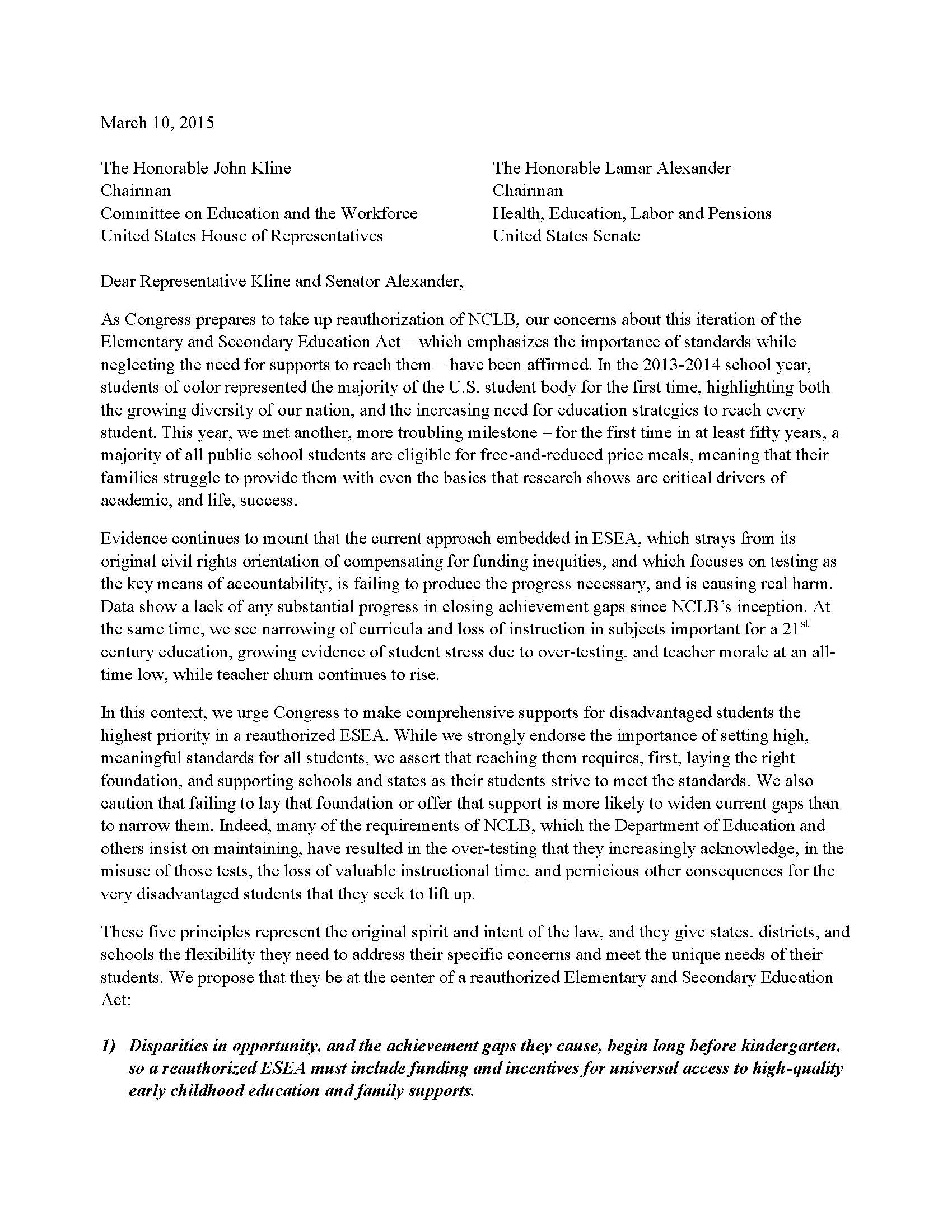 As Congress works on reauthorizing No Child Left Behind (NCLB), First Focus Campaign for Children joined with Broader, Bolder Approach to Education and Opportunity Action to write and circulate this letter.This letter voices signers' concerns that NCLB’s emphasis on the importance of standards has resulted in neglecting the need for supports to reach them. It lists five principles for reauthorization that will return NCLB to the original spirit and intent of the Elementary and Secondary Education Act as a supports-oriented civil rights bill.