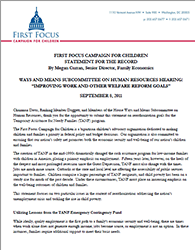 First Focus Campaign for Children submitted this statement for the record regarding the September 2011 United States House Committee on Ways and Means, Subcommittee on Human Resources Hearing, entitled "Improving Work and Other Welfare Reform Goals.”

Statement for the Record: HALT Act

The First Focus Campaign for Children submitted this statement to the House Subcommittee on Immigration regarding the July 26th hearing on the Hinder the Administration’s Legalization Temptation (HALT) Act.

The First Focus Campaign for Children is committed to ensuring that our nation’s immigration policies promote the well-being of children and families. We fully support the Administration’s ability to exercise prosecutorial discretion as well as other relief options while enforcing our immigration laws, especially when the best interest of a child is at stake in such decisions. We strongly oppose the HALT Act as it would eliminate the Administration’s use of prosecutorial discretion for humanitarian purposes and directly threaten the safety and well-being of children and families.