As members of the U.S. Child Poverty Action Group (CPAG), a coalition of national organizations dedicated to addressing child poverty in the United States, we are writing to urge you to build on the momentum following this hearing by passing the Child Poverty Reduction Act and establishing a national commitment to cut our child poverty rate in half within a decade. The Time to Act is Now.

Statement for the Record: Examining the Importance of Paid Family Leave for American Working Families

First Focus Campaign for Children submitted this Statement for the Record  to U.S. Senate Committee on Finance Subcommittee on Social Security, Pensions, and Family Policy for the hearing titled, "Examining the Importance of Paid Family Leave for American Working Families."

The Family and Medical Insurance Leave (FAMILY) Act of 2017, introduced by Senator Kirsten Gillibrand (D-NY) and Congresswoman Rosa DeLauro (D-CT-3), would create a program that combines employer and employee payroll contributions to create a shared fund for paid family and medical leave for all employers of all sizes. Workers in all companies would be eligible for up to 12 weeks of partial income, earning 66 percent of their monthly wages up to a capped amount, for family and medical leave. Paid leave could be used during a pregnancy, for childbirth recovery, serious health condition of a child, parent, spouse or domestic partner, adoption of a child, and/or military caregiving and leave.

The FAMILY Act would allow for working individuals to take paid time off, and would not discriminate based on gender or the nature of their job. By allowing both parents to take valuable time off after the birth or adoption of a child, men are able to be more involved in direct care, therefore creating greater equality in households.

First Focus Campaign for Children submitted the following statement for the record to the Senate Committee on Judiciary Border Security and Immigration Subcommittee.

First Focus is a bipartisan children’s advocacy organization dedicated to making children and families a priority in federal policy and budget decisions. Our organization is committed to ensuring that our nation’s immigration policies promote child well-being and ensure that all children have the opportunity to live a healthy and successful life.

The humanitarian crisis in the northern triangle of Central America has caused an increase in the number of young people who are fleeing horrific gender violence and gang recruitment. We urge both Congress and the Administration to uphold the best interest of the child in all decisions regarding this crisis and the treatment of unaccompanied alien children (UACs). We are concerned with the Administration’s attempts to undermine protections under the Trafficking Victims Protection Reauthorization Act (TVPRA) for UACs including terminating the Flores Settlement Agreement (FSA), judicial discretion to remove UAC status, expedited removal of children from non-contiguous countries, and increased burden of proof for special immigrant juvenile status (SIJS). Rather than weakening protections for children in the face of this humanitarian crisis, Congress and the Administration should be strengthening such protections. 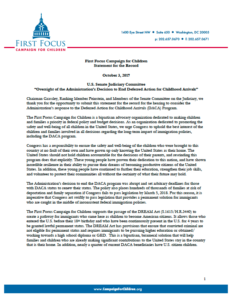 On October 3, 2017, the First Focus Campaign for Children submitted a statement for the record to the U.S. Senate Judiciary Committee on the oversight of the Administration's decision to end Deferred Action for Childhood Arrivals (DACA). 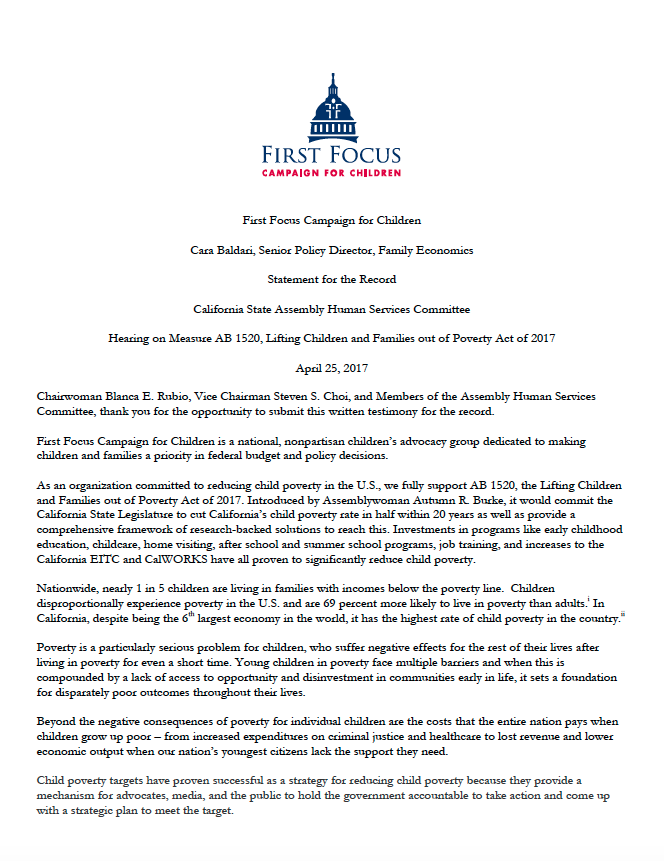 The First Focus Campaign for Children submitted this statement for the California State Assembly Human Services Committee hearing on “Measure AB 1520, Lifting Children and Families out of Poverty Act of 2017.” 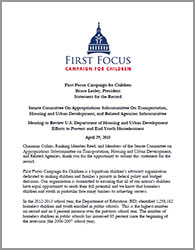 Keeping Families Together: The President's Executive Action on Immigration and the Need to Pass Comprehensive Immigration Reform 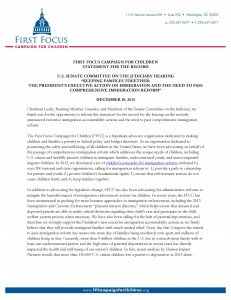 he First Focus Campaign for Children submitted this statement for the record for the Senate Committee on the Judiciary hearing on December 10, 2014 entitled The President’s Executive Action on Immigration and the Need to Pass Comprehensive Immigration Reform. The statement highlights the important impact of the executive immigration actions on family unity and child well-being and calls on Congress to provide a permanent solution for immigrant families by passing comprehensive immigration reform. 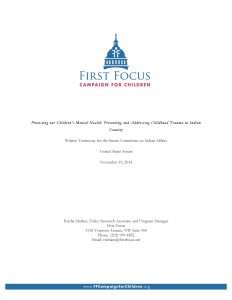 On November 19, 2014, the Senate Indian Affairs Committee held a hearing titled Protecting Our Children’s Mental Health: Preventing and Addressing Childhood Trauma in Indian Country. The First Focus Campaign for Children submitted this statement urging Congress  to allocate more resources and funds to tribes to ensure AI/AN children who have experienced trauma receive appropriate services and to empower tribes with criminal jurisdiction over crimes committed against their members.