“When I was arrested by law enforcement for prostitution, I was made to feel like a criminal, like a juvenile delinquent. I felt stupid, ashamed, and ostracized by society. Days later, alone in my bedroom, I felt so abandoned, so forsaken by society, that I attempted suicide. I wish I could travel back in time to tell this young girl that, years later, advocates and legislators all across the country would be standing up for her, that they would demand better protection and services for kids like her.” -Testimony by Holly Austin Smith

The hearing comes on the eve of Senate consideration of several bills aimed at addressing the prevalence of child sex trafficking in the United States. The Justice for Victims of Trafficking Act (S. 178) provides more resources for victim services, and increases supports for law enforcement- both to catch perpetrators but also for training to better serve victims, the Stop Exploitation Through Trafficking Act (S.166) incentivizes states to implement safe harbor legislation so victims are not criminalized for prostitution and the Runaway and Homeless Youth and Trafficking Prevention Act which includes services at homeless shelters for trafficked victims and extends the length of stays for runaway and homeless youth in emergency shelters. The bills are expected to be marked up by the Committee on Thursday and will likely be called for a full vote sometime next week.

In a show of solidarity and bipartisan support, several of the senators who requested the hearing testified and spoke on different aspects of the needs victims face. Senator Collins (R-ME) highlighted the issue that many of the youth who are trying to escape their traffickers and rehabilitate themselves have nowhere to go and often become homeless. Therefore partnerships between housing providers and other service providers are critical. Senator Gillibrand (D-NY) emphasized that buyers should be held strictly liable for their crimes and that families, schools and the foster system are failing these children and Senator Ayotte (R-NH) drew the correlation of drug trafficking with sexual exploitation of children as well as the need for prevention services. Finally, Senator Mikulski (D- MD), Ranking Member of the Senate Appropriations Committee stressed the need for all the Committees to work together to pass the important pieces of legislation that would provide resources for the victims.

Panelists also discussed the issue of deterring traffickers and buyers at length. Malika Saada Saar the Executive Director for the Human Rights Project for Girls pointed out that penalties for those who rape minors are higher than those who pay to rape minors. She also stressed that often the buyers need to be held accountable so that the demand for trafficking is reduced. Michael Ferjak an Iowa Criminal Investigator discussed the training of law enforcement officers in investigating traffickers and buyers and guiding victims to appropriate services.

This hearing was unique and encouraging because broader systemic issues were discussed that lead to children being sexually trafficked. The link between homeless youth and trafficking is an important one as traffickers often prey on this vulnerable and desperate population. However, equally important was the point made by Jayne Bigelssen that as many as 50% of these youth have nowhere to go. Shelters are at capacity and unless more funding and resources are put into homeless and housing programs, these children will remain at-risk for trafficking. Similarly, Holly Austin Smith spoke on the need to recognize that LGBTQ youth are trafficked at significant rates, but have fewer resources available to them. It is important that these topics are not overlooked in legislation that is aimed to end the exploitation of children.

We are hopeful that this robust discussion will ensure passage of the Justice for Victims of Trafficking Act, the Stop Exploitation Through Trafficking Act and the Runaway and Homeless Youth and Trafficking Prevention Act through the Senate Judiciary Committee and the Senate floor and that Congress will continue to engage in this issue until trafficking of children is completely eradicated. 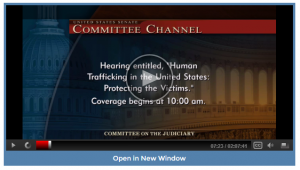