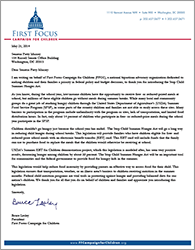 First Focus Campaign for Children sent a letter to Senator Patty Murray in support of her new legislation, the Stop Child Summer Hunger Act. While some children are able to access the United States Department of Agriculture’s Summer Food Service Program there are many barriers that prevent children from participating in summer programs. The Stop Child Summer Hunger Act would be an important tool to help reduce child hunger during school breaks.

In addition, First Focus Campaign for Children also sent a letter in support of the House of Representatives version of the Stop Child Summer Hunger act, which was introduced by Congresswoman Susan Davis. This legislation is identical to the Senate version.