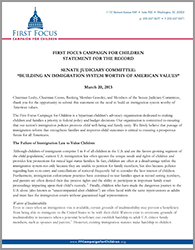 On March 20, 2013, the Senate Judiciary Committee held a hearing presided over by Senator Chris Coons (D-DE) titled “Building an Immigration System Worthy of American Values.” The hearing focused on the high cost exacted by our immigration system on families, on civil liberties, and on human dignity. The FFCC submitted this statement urging congress to reform our immigration laws so that they promote the best interests of all our nation’s children, including unaccompanied immigrant children, and protect the due process rights of parents involved in immigration proceedings.