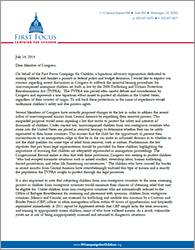 On July 14, 2014 the First Focus Campaign for Children sent this letter to Members of Congress to urge them to preserve critical protections governing the rights of unaccompanied children under the bipartisan Trafficking Victims Protection Act (TVPRA) of 2008. In order to address the influx of Central American refugees, both Members of Congress and the Administration have proposed rolling back certain protections for unaccompanied children from non-contiguous countries in order to expedite the removal process. This letter warns against this approach and explains why such proposals undermine the safety and due process rights of children and put them in harm’s way.