In Support of Summer Meals Act 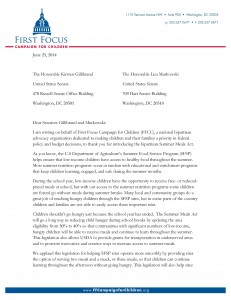 First Focus Campaign for Children sent a letter to Senators Gillibrand and Murkowski in support of their new bipartisan legislation, the Summer Meals Act. While many children are able to access the United States Department of Agriculture’s Summer Food Service Program there are many barriers that prevent some children from accessing a site in their area. The Summer Meals Act would be an important tool to help reduce child hunger during school breaks and allow more eligible children to access summer sites.

In addition, First Focus Campaign for Children also sent a letter in support of the House of Representatives version of the Summer Meals Act which was introduced by Congressmen Don Young and Rick Larsen. This legislation is identical to the Senate version.