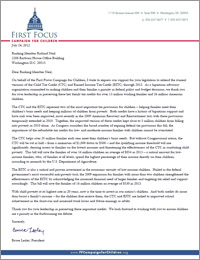 On July 24, 2012, First Focus Campaign for Children endorsed legislation by Congressman Richard Neal (MA-2) to extend critical, but expiring, improvements to the Child Tax Credit and Earned Income Tax Credit for one year. Together, the improved version of these credits kept close to 5 million children from falling into poverty in 2010 alone. This bill will preserve these key credits for 13 million families and 26 million children nationwide.