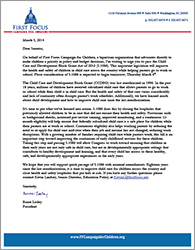 The First Focus Campaign for Children sent this letter to the Senate on March 5, 2014 with the expectation that the Child Care and Development Block Grant (CCDBG) Reauthorization Act of 2013 would be considered on the Senate Floor the following day, March 6th. The letter points out that it has been 18 years since CCDBG was reauthorized and urges all Senators to vote for the bill with no significant changes through the amendment process. As the letter states, this will improve child care for all children and close health and safety loopholes in federally subsidized child care.