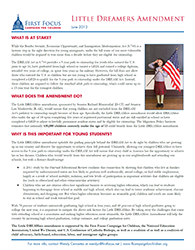 Senate immigration reform legislation (S. 744) provides a five-year path to citizenship for youth who entered the U.S. prior to age 16, graduated from high school or earned a GED, and earned a college diploma, attended two years of college, or spent four years in the military. The bill’s educational requirements effectively deny children access to the DREAM path to citizenship, if they are too young to graduate from high school. Instead, those children must follow the path to citizenship established by the bill for adults, which could mean a delay of up to thirteen years.