Vote Against the Student Success Act 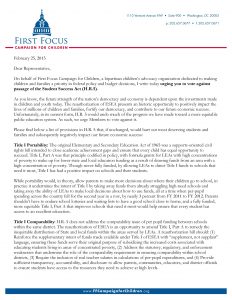 On February 25, 2015, FFCC sent this letter regarding the the House of Representatives markup of the Student Success Act (H.R. 5). This legislation, sponsored by Representative Kline, would reauthorize the Elementary and Secondary Education Act (ESEA). First Focus Campaign for Children sent this letter regarding the markup, highlighting the opportunity that reauthorization of ESEA presents to positively impact the lives of millions of children and families and contribute to our future economic success. It also highlights FFCC’s serious concerns with H.R. 5.