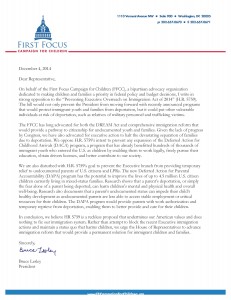 On December 4th, 2014, the First Focus Campaign for Children sent a letter to members of the House of Representatives urging them to vote against the “Preventing Executive Overreach on Immigration Act of 2014” (HR 5759). The bill would not only prevent the President from moving forward with recently announced programs that would protect immigrant youth and families from deportation, but it could put other vulnerable individuals at risk of deportation, such as relatives of military personnel and trafficking victims.