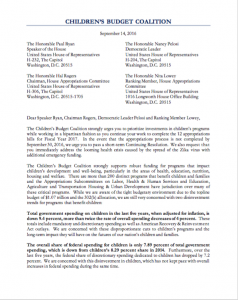 On September 14, 2016, members of the Children’s Budget Coalition submitted a letter to the Senate and House of Representatives urging Congress to prioritize investments in children’s programs while working in a bipartisan fashion, pass a short-term CR and address the looming Zika virus health crisis with emergency funding

Included are 23 members of the Children’s Budget Coalition.

Read the letter to the U.S. Senate.

Read the letter to the U.S. House of Representatives.