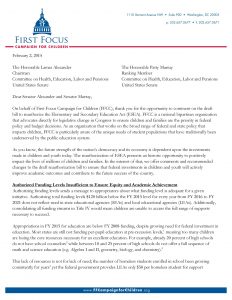 First Focus Campaign for Children (FFCC) sent this letter to Chairman Alexander and Ranking Member Murray, both of the Senate Health, Education, Labor and Pensions Committee, regarding the draft bill to reauthorize the Elementary and Secondary Education Act (ESEA, renamed No Child Left Behind in 2001) released by Sen. Alexander early this year. The future strength of the nation’s democracy and its economy is dependent upon the investments made in children and youth today and the reauthorization of ESEA presents an historic opportunity to positively impact the lives of millions of children and families. FFCC offered comments and recommended changes to the draft reauthorization bill to ensure that federal investments in children and youth will actively promote equity, improve academic outcomes for every child, and contribute to the future success of the country.