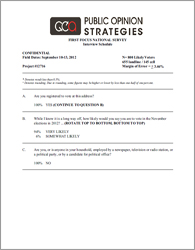 Public Opinion Strategies — a nationally-recognized opinion research firm that works with Republican campaigns and in corporate and public affairs — completed the poll for the First Focus Campaign for Children in mid-September, 2012. This document summarizes the "topline" results. A related Public Opinion Strategies memo underscores key findings from the poll.

First Focus Campaign for Children completed an additional analysis of responses from likely Latino voters, which can be found here.