How Kids Fare in the Senate “Tax Cuts and Jobs Act”

The Senate to Vote on the Tax Cuts and Jobs Act 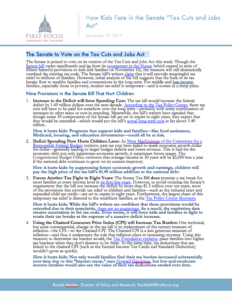 The Senate is poised to vote on its version of the Tax Cuts and Jobs Act this week. Though the Senate bill varies significantly and its from its counterpart in the House (which passed in spite of fifteen harmful provisions to kids and families on November 16), the measure will still dramatically overhaul the existing tax code. The Senate bill’s writers claim that it will provide meaningful tax relief to millions of families. However, initial analysis of the bill suggests that the bulk of its tax breaks flow to wealthy families and corporations in the long term. For middle and low income families, especially those in poverty, modest tax relief is temporary—and it comes at a steep price.

Nine Provisions in the Senate Bill That Hurt Children:

How it hurts kids: Programs that support kids and families—like food assistance, Medicaid, housing, and education investments—could all be at risk.

How it hurts kids: by suppressing future economic growth and earnings, children will pay the high price of the tax bill’s $1.49 trillion addition to the national debt.

How it hurts kids: While the bill’s writers are confident that these provisions would be extended due to their popularity, there are no guarantees. As a result, the expiration date creates uncertainty in the tax code. Even worse, it will force kids and families to fight to retain their tax breaks at the expense of a massive deficit increase.

How it hurts kids: Not only would families find their tax burden increased substantially over time due to this “bracket creep,” says Howard Gleckman, but low-and-moderate income families would also see the value of their tax deductions eroded over time.

How it hurts kids: Over one million immigrant children would lose the Child Tax Credit, with possible effects on families with newborns and adopted children experiencing delays in receiving social security numbers for their children.

How it hurts kids: Removing the personal exemption could penalize larger families, especially those with children in college

How it hurts kids: Lower state and local taxes would make it harder for states — many of which already face serious budget strains — to raise sufficient revenues in the coming years to invest in K-12 education and child welfare services, both of which rely heavily on state and local funding. The Senate’s positive step to increase the educator expense deduction—a move that would double the current $250 deduction available to teachers who self-supply classroom supplies—will not be enough to counteract the loss that schools will face due to diminished state and local funding streams.

How it hurts kids: The repeal of the Mandate means some families will no longer opt to purchase health insurance through the Marketplace—meaning they also would no longer receive government subsidies to purchase insurance. The Joint Committee on Taxation scores the loss of the subsidies as a net tax increase starting in 2027 for families earning less than $75,000 (half of all US households would also see a tax increase in that same year independent of the mandate repeal). Furthermore, undermining the insurance market could drive the cost of premiums up by 10 percent in 2019, hurting families who remain in the individual marketplace, and would likely also lead to 5 million fewer participants in Medicaid. The Congressional Budget Office estimates that as a result, the federal government would spend less money on the poorest individuals—those earning less than $30,000 a year—as early as 2019.

Three Pieces of the Senate Bill Have Potential to Work Better for Kids:

The Senate tax bill is flawed, but it has at least two policy provisions that could be improved upon to better benefit kids and families:

How it could work better for kids: Instead of increasing the phase-out level, which disproportionately favors wealthy families, the bill should instead make the entire $1,000 Child Tax Credit increase refundable, starting at the taxpayer’s first dollar of earnings. Not only would this better target the credit to those who need assistance the most, but estimates from the Century Foundation suggest that it would increase the cost of the Child Tax Credit by less then $59 billion a year—cheaper than the Senate’s current proposal, which is estimated to cost an average of roughly $68 billion a year.

How it could work better for kids: While it is encouraging that lawmakers are attempting to incentivize increased access to paid leave programs, modest employer tax credits are unlikely to spark the kind of comprehensive paid leave that would benefit low-earning families. Lawmakers looking to create equitable access to paid leave should embrace plans like the FAMILY Act (sponsored by Congresswoman DeLauro (D-CT) and Senator Kirsten Gillibrand (D-NY) which would combine employer and employee payroll contributions to create a shared fund for affordable and adequate paid leave for employers of all sizes.

How it could work better for kids: The PACE Act would increase the value of the CDCTC, make it refundbale, and index it to inflation. Lawmakers should take the opportunity to support targeted improvements to the CDCTC to help families mitigate the skyrocketing cost of childcare.

We urge lawmakers to pursue bipartisan tax reform that prioritizes moderate and low-income families in the long term, without jeopardizing government spending that provides crucial supports for children.