Recently, the House of Representatives passed its tax bill to dramatically overhaul the existing tax code with a 227 to 205 vote. The bill’s supporters claim that the Tax Cuts and Jobs Act (H.R. 1) will provide meaningful tax relief to millions of families. However, initial analysis of suggests that for families with children—especially those who are low-income—this is not the case. In fact, First Focus Campaign for Children has identified fifteen provisions that harm kids and families. 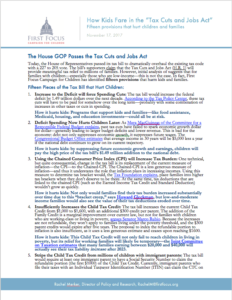 Fifteen pieces of the Tax Bill that Hurt Children:

How it hurts kids: Programs that support kids and families—like food assistance, Medicaid, housing, and education investments—could all be at risk.

How it hurts kids: by suppressing future economic growth and earnings, children will pay the high price of the tax bill’s $1.49 trillion addition to the national debt.

How it hurts kids: Not only would families find their tax burden increased substantially over time due to this “bracket creep,” says Howard Gleckman, but low-and-moderate income families would also see the value of their tax deductions eroded over time.

How it hurts kids: This Child Tax Credit will not only fail to reach children in living in poverty, but its relief for working families will likely be temporary—the Joint Committee on Taxation estimates that many families earning between $20,000 and $40,000 will actually see their tax liability increase after 2023.

How it hurts kids: Over 5 million children, 80 percent of whom are US citizens, and many of whom are economically vulnerable, would lose the Child Tax Credit.

How it hurts kids: Removing the personal exemption penalizes families with children, whether they are single or married, especially once other family credits expire.

How it hurts kids: Lower state and local taxes would make it harder for states — many of which already face serious budget strains — to raise sufficient revenues in the coming years to invest in K-12 education and child welfare services, both of which rely heavily on state and local funding.

How it hurts kids: Teachers will essentially have fewer dollars to purchase school supplies—meaning children may have less access to the resources they need for a high-quality education.

How it hurts kids: Ending Coverdell accounts while expanding 529’s to include K-12 tuition would effectively incentivize wealthy Americans to put away money for private school—further limiting the resources available to public schools.

How it hurts kids: The repeal of student loan deductions would make higher education less affordable for low-income students, as well as foster-youth who often have to take out private student loans to pay for college.

How it hurts kids: According to former undersecretary of education Ted Mitchell, the repeal of these credits would discourage participation in postsecondary education, while making it more expensive for those who do enroll.

How it hurts kids: While DCAP can (and should) be strengthened, its repeal will only further limit the options available to working parents struggling to afford the skyrocketing costs of high-quality care for their children.

How it hurts kids: Repealing the credit is a disincentive for businesses to invest in the process of making childcare affordable and accessible to employees, limiting the options available to working parents struggling to afford high-quality care for their children.

How it hurts kids: The Center for American Progress highlights that this deduction is critical for middle-class and low-income families with special needs and/or chronically ill children, who could now lose access to the full range of care they require.

While not definitive, the above list is an important reminder that the bill that just passed the House—with support from 227 lawmakers—does much more than cut tax rates. Provisions that appear to benefit families in isolation aren’t happening in a vacuum, and thus could have long-lasting consequences. Meanwhile, many of the choices made in the name of “simplification” will be a direct hit on important supports for children and families in the tax code. Altogether, this long list of provisions suggests that families are not the priority in the House’s tax overhaul.